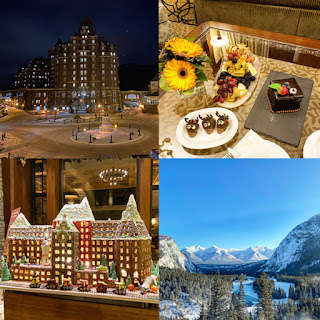 Banff is absolutely beautiful during winter time and if you have to choose between Fairmont Banff and Fairmont Lake Louis, I would definitely go with Fairmont Banff.  The reason being Lake Louis is basically a big frozen ice cube with not much scenery to speak of.  So unless you like to figure skate, imo, Fairmont Banff Springs is the way to go as the old castle in the snow look is prettier in my opinion.

There is no doubt that Fairmont Banff rooms need some definite RnR.  Quite a few of the rooms are not updated and they are tired for sure.  However, there is some charm to the old timey furniture in the room that are reminiscent of visit to grandma's home.  With that said, thankfully bathrooms are updated.  I had the pleasure to stay at room 611 which is the Rungius Suite.  The suite was named after Carl Rungius,  a German American painter, who spent his time painting western United States and Canada in the first half of 20th century.  In fact, Rungius had a studio in Banff that he kept until 1959, the year he died.  I can see why the suite was named after him as my room has a glorious view of Bow River and Mount Girouard.

The service is somewhat uneven.  Staying at a suite gives me access to their private concierge desk which is quite nice as they can basically make things happen even down to calling to get my rental car ready.  They really do try hard.  However, there were a few times balls were dropped.  With that said, I would highly recommend staying at their Gold Level rooms as that gives you access to the private concierge desk.

Their spa was under renovation during my stay.  I had a manicure in basically one of the hotel rooms that were transformed into a spa room.  It was a bit disappointing as this hotel was known for the spa and I didn't really get to enjoy the facility.  I guess it's one of those I will have to return to see the newly renovated spa for myself!  On top of that, somehow my scheduled appointment, which I changed a few times through private concierge desk, got mixed up and I ended up arriving an hour early for my reservation.  Not end of the world but again, would have been nice if the mistake didn't happen.

I didn't have dinner at the hotel as the restaurants that I was interested in were not open during the time I was there.  However, there were few restaurants dotted around Banff that seem to have great reviews such as Eden and Three Ravens Restaurant.  I went to both restaurants and I would recommend them.  Eden is more traditional French while Ravens is modern eclectic.  Both times the private hotel concierge sent hotel car to drop me off and pick me up.  It was much appreciated since I prefer not to drive at night in snowy condition in a foreign country.

Since I was there before Christmas, they had an event center building (across from the main hotel) where they had a play called A Christmas Carol.  Apparently it's done every year around Christmas time.  I highly recommend it as it puts everyone in a cheery Christmas mood.  It wasn't an elaborate production but it was quite lovely.

The hotel also has a history section above the general public check in area.  It's nice to have a mini museum inside the hotel as it allows guests to appreciate the architecture more.  The ground floor also has tons of shops to buy souvenirs from.  I bought a few well made wands (in the spirit of Harry Potter) from an art gallery inside the hotel.  There are definitely quite a few fun shops to keep me occupied and scratch the shopping itch.

Overall it was a lovely stay and if I return to Banff in the winter, I would definitely stay at this Fairmont again.  Hopefully all the rooms/suites and spa would be renovated by then.

Posted by Purefecto at 8:12 PM