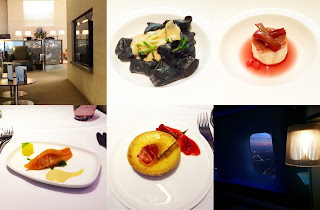 This is a review of British Airways first class from Heathrow to JFK.  I would say the best part is probably playing with the window shades!  LOL.  But I digress.  Let me start from the beginning.

At Heathrow airport, they separated the first class lounge from the business class lounge.  The business class lounge is on the top floor of the airport.  It's large and there are buffet areas where you can pick up food a la cafeteria style.  I find this lounge typically packed with people.  There is no sense of serenity for sure.  Essentially not that different from the regular waiting area outside with the exception of buffet.  Well, maybe I'm being harsh.  The finishes is nicer than outside regular area but it has a hurdling cattle feel due to large number of people inside the lounge.

Luckily I flew first class this time.  First class lounge is on the second floor, a floor below business class lounge.  The area seems smaller but obviously a lot less people fly first too.  The lounge was packed with right amount of people.  It wasn't empty but certainly was not over crowded like the business class lounge.  There are couple good things that differentiates first class lounge from the business class lounge.  One, you can reserve a resting pod where you can take a shower, make phone calls, or take a nap.  It's nice to have an amenities like this.  However, the pods get booked up quite often so if you know you want a private pod, best reserve one well in advance.  The other good thing is that there is a restaurant within the first class lounge.  Everything on the menu is free.... well, sort of, since it's included in your ticket price.  The food is actually not bad.  I would say better than your run of the mill restaurant food but below Michelin star level.  There is also free spa service right outside the first class lounge.  I believe it is shared with the business class passengers.  If you want to get a spa treatment, I would definitely put your name on the list before you enter the lounge as they seems to be very booked when I tried to get an appointment.  I did managed to get one though.

Now to the airplane experience.  I thought the seat was nice.  Not as wide as Cathay Pacific's first class (that's a review for some other time) but finishes was nice.  I thought the shape of night light was an elegant touch.  There is a large private compartment to store one's jacket which I like.  You can also put your shoes in the compartment.  The electric window shade was probably the best part of the seat.  Sounds dumb moving a window shade up and down.  But since I never done that before on an airplane, I thought it was cool.  I also like the lighting.  They had a overhead blue light which makes the cabinet looks futuristic.

You get two giveaways from the first class.  One, you get a set of pajamas.  They are quite soft and great for lounging around.  The top has a nice BA logo with the word First on it.  The other amenity you get is a wash bag from the Refinery which is a grooming specialist brand based in London.  The bag is actually pretty nice; it is made of canvas and leather.  I can see me reusing the bag for future trips.  Inside the bag there are: revitalizer moisturizer, eye gel, lip balm, deodorant stick and shave gel.  I thought the deodorant stick was a nice touch as one doesn't typically get them in an airplane wash bags.  In addition to these Refinery brand products, the bag also has a brush/comb, disposable razor, British Airways First branded pen, reusable toothbrush and travel size tube of Colgate toothpaste.  I pretty much chucked most of these and only keep toothpaste and pen.  You also get an eye mask and a pair of socks which again, I chucked as I never use them.

The airplane food was not bad.  Not as good as the one I had at the first class lounge but they do have pretty decent selections.  For example, you can choose to have dishes such as: duck confit terrine with pickled apple puree, carrot, celeriac and grain mustard salad and a beetroot jelly or/and chicken tikka masala with dal makhani and jeera pilau rice (don't ask me what's jeera pilau rice... I just assume it's a rice from jeera pilau region....but honestly, I think they just put that in to make the dish sounds fancy).  Dessert selection includes: rhubarb and red currant tart with rhubarb compote or warm chocolate and hazelnut torte.

After dinner, they came and fluff up my seat and turn it into a bed by adding a quilted mattress (not really a mattress.... more like mattress topper) and a duvet.  It's very civilized I must say.  The mattress did make sleeping more comfortable for sure.

I thought the service was good.  They were very friendly and when they found out it was my first time taking BA first class, they explained all the buttons to me.  Having been on their business class many times, I have to say the service in first class is noticeably better.

Overall I enjoyed the experience very much.  My understanding is that airlines such as Singapore airline or Etihad airline offers better hardware experience but since I never been on either airline before, I have no way to compare them.  But from reading online reviews, I'm sure I'll enjoy those two airlines very much.  I hope someday I get to try them!