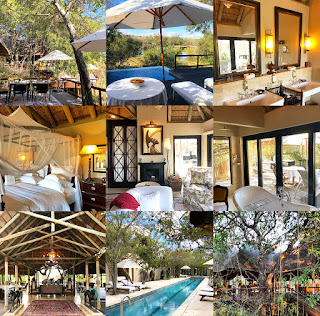 There are many places to go on a safari trip in South Africa.  But when French president Nicholas Sarkozy, Gates family, Elton John, Paul Allen, Bono, etc. repeatedly go to Royal Malewane resort, you know RM is doing something right.  Is Royal Malewane the most perfect safari experience one can have?  Because I can only compare it to two other safari lodges in Africa, I can't say that must be the case.  However, I can see why people who can afford to go anywhere repeatedly go back to Royal Malewane: location, service, accommodation, and game drive are all top notch.

Royal Malewane is next to Kruger Park which is the most famous safari public park in South Africa.  Guests of RM don't actually go into Kruger Park most of the time, you stay in their private game reserve called Thornybush...and literally the bushes are thorny! I have no idea the difference between private game reserve and public park until I came here.  Difference is private game reserve is literally owned by a private individual/ company so you are allowed to drive off road.  In addition, because it is a private property, you seldom see many jeeps.  In my opinion, this makes a huge difference as most games are not right next to road thus when you are in a private reserve, you get to see animals much closer than you would at a public park which requires all cars stay on public roads; off road driving is not allowed.  Secondly, another benefit with private reserve is you see a lot less jeeps which enhance the animal viewing experience not to mention a lot less dust.  If you have been to Serengeti Park or Masai Mara Park, you know exactly what I mean... a few hours in a jeep means covered in dust from other jeeps passing your jeep or you passing other jeeps.

There is never lack of things to do at Royal Malewane.  Typical daily schedule is: get up at 6AM and leave between 6:30 and 7AM for a morning drive.  When you get back around 9:30AM, they feed you with a huge breakfast spread.  Then around 1PM you eat lunch.  Then around 3:30PM, you go out for an afternoon drive.  You usually get back around 6:30-7:00PM.  Dinner is around 8:00PM.  So essentially you have between 9:30AM-3:30PM free.  But because of the packed animal viewing schedule, typically you just want to relax and do nothing between game drives; most people catch up with some sleep, download photos onto computer, emails, read, gym, and/or spa.

The service at Royal Malewane is fantastic.  Everyone is really nice and kind.  Anything you need you just ask and it's done.  There is never any push backs with requests.  Rooms are made up several times a day while you are gone on game drives.  They also come to clean up the room while you eat lunch and dinner.  Hence your room is always spotless.

Speaking of rooms, they are actually all free standing lodges.  All are very nicely appointed although not particularly large.  Bathroom is very generously sized; same size as bedroom/ living room.  Plumbing worked perfectly like the ones at home.  I'm not a fan of their high beds as it's not easy to get in and out of.  However, that's a minor quip.  The bedroom/ living room also has a nice cozy fireplace which is a great touch especially during winter time (July/ August).  The dipping pool outside unfortunately was freezing cold.  I wish they can be warmed up.  In addition to indoor shower, there is also an outdoor shower option which is very nice.  The lodges are quite far from each other so you don't hear any noise from your neighbors which is a huge plus.

Royal Malewane has a gorgeous spa which has to be seen to be believed.  It's definitely one of the prettiest spa I've seen in Africa.  I had a massage which was excellent.  I was worry I wouldn't be able to get a deep massage like I usually get back at home; I can attest my masseuse was very capable of breaking up knots in my back.  I would definitely recommend the massage service at this spa.

Food was generally good except we had a bush dinner once which due to equipment, entree was overcooked.  With that said, I would say the food here is what I called Four Seasons good....you will get solid good food but don't expect Michelin star level or anything close to it.  In terms of eating time, it's up to you.  You can eat breakfast at 1PM if you choose to or eat right after you come back from the morning game drive at 10AM.  Same with dinner.  Typically they start dinner around 8PM and you can eat in your room or anywhere on the property.

Because this is my first African safari, I didn't know what to expect for the game drive.  I would say it's quite good.  You will generally see something interesting every 30 minutes... be it a lion, a hyena, a wild dog, or a cape buffalo.  I was there for a total of three nights and four days and I saw the big five and then some.  It's always very exciting on every game drive as you never know what you will see.  I would say Thornybush had more than met my expectation.  One thing about coming to Royal Malewane in July/ August is that there is very few bugs around due to colder weather.  In fact, you definitely need your puffer jacket and a scarf in the morning drive as it can get quite chilly with open air jeep.

Lastly, there is a waterhole right in front of the lobby/ dining area.  There are always tons of elephants coming to have a drink.  Some even frolic inside the pond.  One time we saw a hippo hidden inside the waterhole which surprised all the elephants.  Because there are so many elephants around the waterhole, the lone hippo quickly left the pond for its own safety!  There are also many deers on the property.  They are very use to human and won't run away when you get close.  When you eat lunch, you always have to watch out for monkeys as they may all of a sudden show up and snatch your food!  So as you can see, even if you decide not to go on a game drive, you can still find plenty of action on the property.

Overall I would highly recommend Royal Malewane and I can see why celebrities keep on returning to this sumptuous property.  If I were to return to South Africa for a safari trip, I would definitely come back to Royal Malewane.
Posted by Purefecto at 9:00 AM 1 comment: