Lost in the Reverie in Saigon 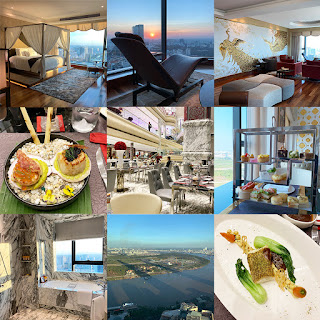 The Reverie Saigon, no doubt, is the most luxurious hotel right now in this southern Vietnamese city. With Mandarin Oriental opening next door in 2020, should the Reverie Saigon be worried?  I don't think so as I'm sure the interior decor at Mandarin will be vastly different from The Reverie Saigon.

To say the Reverie Saigon is luxurious is perhaps an understatement.  Right when you walk in, it's full on Italian marble from floor to ceiling.  At the Reverie Saigon, 24 karat gold, is splashed everywhere!  My first thought was only if Liberace can dream up a hotel, this place would be it.  The owner wanted Italian opulence that perhaps no place in Asia have ever seen before and since.  You can tell no expense was spared.  I am doubtful Mandarin Oriental has half of the interior decor budget that the Reverie Saigon had.  I suspect the hotels will split tourist groups into two kinds: the ones who loves bling will go for the Reverie Saigon; the ones who likes something more elegant and subtle will go for Mandarin Oriental.  Given the construction boom Saigon is having, I'm sure both hotel will have no problem filling up their beds.

The suite I stayed is called the Designer Suites by Giorgetti.  Clearly everything in the room is imported from Italy.  I chose this room because it's the most clean cut modern/ not so over the top suite offering in the hotel.  Naturally the living room has what looks like a Sicis glass mosaic panel that practically covers whole length of the wall.  This huge expensive/expansive mosaic panel feels much more appropriate in a hotel lobby than in a living room of a suite.  The oddest thing of the suite is there is no bathroom fan which doesn't seem to make any sense.  I believe the architect of the building dropped the ball.  The lack of ventilation means they have to think of ways to rectify this situation.  One of the way is turn down the temperature of the shower.  Thus if you enjoy lukewarm shower (i.e. not so much steam), you are at the right hotel.  If you want scalding hot shower, better move along.  The worst part of the suite is the noise across the street; there is a nightclub (moved in couple years ago) that plays loud thumping music nightly!  I was told all the highest category suites of the hotel all happen to face this night club!  Luckily Designer Suite by Giorgetti is more off to the side thus avoid the direct blast of the night club and music is somewhat muddled compared to say the Designer Suite by Provasi which gets the full blast treatment!

I had dinner at the Cardinal which serves contemporary French cuisine in the evening.  Since Vietnam used to be a French colony, I had expected the French food here to be as good as the ones in Paris.  Furthermore, this is the most expensive hotel in Saigon thus I had expected minimally one Michelin star level French food at their main restaurant.  Sad to say, it was not.  It's not that food was terrible; I just had really high expectations and it was not met.  I would say food at this restaurant is thoroughly competent but don't expect Michelin star level food.  In another words, think Four Seasons good enough food.

By staying at the Designer Suite, I had access to the Reverie Lounge on 38th floor.  This essentially is Reverie Saigon's club lounge.  You can come here to have free snacks or afternoon tea.  The view here is very nice and I would highly recommend guests to utilize this lounge if they have access to it.  I enjoyed the afternoon tea and snacks very much.

All the staff here are quite nice.  The service standard is good.  Staff always smile and tried to be helpful.  While not everyone's English is fluent, majority of the staff can converse with me with no problem which is helpful when I need help.

I think next time when I come to Saigon I will try Mandarin Oriental as the decor style at The Reverie Saigon really just isn't my cup of tea.  With that said, if MO doesn't open next year and I come back to Saigon, I would not have any problem staying at RS again.  The location of the hotel is good and if you like this over the top style, you will really enjoy staying here.

Does Sofitel Legend Metropole lives up to its lofty reputation? 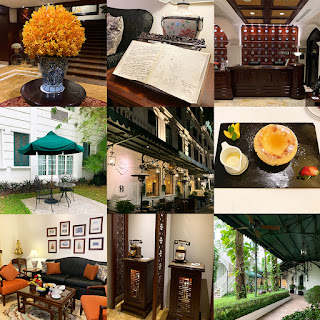 Sofitel Legend Metropole has been around since 1901.  This French colonial style hotel has hosted the who's who of the world: George Bush, Francois Mitterrand, Jacques Chirac, Jane Fonda, Charlie Chaplin to name a few.  Of course recently it was the venue that hosted the infamous meeting between Donald Trump and Kim Jong Un.  Famous writers are known to whip up a novel at the hotel as well; Somerset Maugham wrote The Gentleman in the Parlour at the hotel; Graham Greene wrote The Quiet American during his stay at the hotel in 1951.

The hotel actually has two entrances.  One is the original one and the other is located at the new wing.  Like all hotels, this hotel hosts conferences.  While I was there, every night there were lots of conferences/parties going on.  I understand that's part of the hotel function but it certainly doesn't make the hotel feels exclusive or luxurious.

The new wing is where the renovated rooms are.  They are renovated to a nice quality but unfortunately the room that was allocated to me was facing directly to an elevator bank.  While normally it would be ok.  But given large conference crowds I'm seeing in the lobby area, I start to think I will have very late nights with lots of noises coming from drunk conference attendees waddling out of elevators.  In addition, the windows in my room were facing some kind of department store which looks like it was going under some kind of renovation.  I ended up requesting to move to a different room due to these reasons.  Management was very reluctant to move me which again, I guess is indicative of brands at this level.  Once again, I'm reminded I'm not staying at a Four Seasons or Mandarin Oriental but a Sofitel.  Eventually the management moved me to Somerset Maugham Suite which was very lovely.

The suite is essentially a one bedroom suite with a large interior courtyard balcony.  This is lovely as one can take in tea or breakfast facing interior courtyard which is a lot quieter than facing outwards.  The bathroom is on the dated side but certainly serviceable.  The room is quiet which is important for any travelers as that allows one to rest without waking up by traffic noise either from elevators or traffic.

Restaurants at the hotel are very lovely especially Le Beaulieu.  This was my first foray to Sofitel brand.  The hotel, while nice, doesn't seem particularly high end thus I had my doubts about their restaurants.  I was very happy to be proven wrong.  The wait staff couldn't be any more attentive not to mention food, while traditional, is delectable and on point.  In fact, I liked it so much I came back the second time!  I guess it shouldn't be a surprise as Vietnam is a former French colony.  The Spices Garden, which is their Vietnamese food restaurant, is also delicious with great attentive staff!  I wouldn't hesitate to eat at either hotel upon my return visit.

The hotel is within a stone's throw distance from a local high end mall called Trang Tien Shopping Mall.  Thus if you are in need to shop at international brands like Dior, Louis Vuitton, or Cartier, you are in luck.  If music is your thing, then Hanoi Opera House is also within a short walking distance.  In addition,the hotel is close to a lake called Hoan Siem Lake which is a perfect for a morning run if you are into that.  For a closer shopping experience, hotel has couple gift shops on the ground floor which have a wide variety of local made goods that looks expensive but easy on the wallet.

Overall I had a nice stay at the hotel.  I thought the service level was quite high and food was delicious.  I'm pleasantly surprised by Sofitel brand.  Next time when I come back to Hanoi, I will probably stay at Four Seasons Hanoi to see how it stacks up to Sofitel Metropole.  I'm sure the finishes at the new Four Seasons Hanoi will surpass Sofitel Metropole but the real test will be the level of service.  With that said, I wouldn't hesitate to recommend my friends and family to stay at Sofitel Metropole especially if they like to stay at historical hotels.
Posted by Purefecto at 10:12 PM No comments: