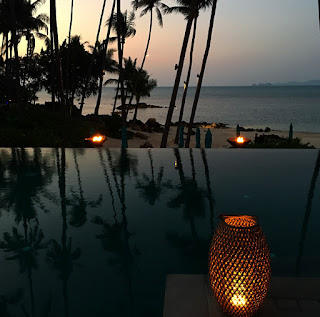 Having stayed at several Four Seasons Hotels/ Resorts in the past, I have to give kudos to the Four Seasons Resort at Koh Samui for their service.  This resort had given me better service than any other resort/ hotel I have ever been to.  Case and point.  When my bed was not as soft as it could be, the housekeeping team came right away to rectify the situation.  When I took the house car to visit places recommend by their concierge, the head of housekeeping was waiting next to the car in the carport wondering if her team had made the bed soft enough to my satisfaction!  I have never been to any hotel/resort where the head of housekeeping is so concern with my comfort and took the time to talk to me face to face to ensure her team had done a satisfactory job.  The staff is really there to make sure everything is to your liking.  I have to give credit to Jeff, the general manager at this Four Seasons Resort.  The service standard is so high here that I don't think I'll ever encounter anything like it anywhere else in the future.  And that's just a slice of the excellent service I received at this hotel.  I can go on and on but enough of the service and let's talk about the resort.

The resort is on a lush hillside.  I believe there are a total of 60 villas and 12 estate lodges.  The estates lodges are basically houses with multiple bedrooms.  The villas, on the other hand, are all basically one bedrooms.  I believe there maybe couple family villa where there is two bedrooms but most are just one bedrooms.  There are basically three categories of villas: duo standing, single standing, and single standing with a pool.  The duo standing and single standing villas also have pools but they are more like dipping pool than swimming pools.  There are three single standing villas with a swimming pool and all are walking distance to the beach.  If your rooms are in the 900s then you can definitely walk to the beach from your villa.  But this also means that you will hear noises from the beach where beach bar/ beach pool is located at.  It's a trade off.  The three freestanding villa with swimming pool is off to the quiet side of the beach.  To access #908 and #909, you will have some small hill to climb.  #910 is literally right on the beach but because it's all the way on the side, paradoxically, it's actually the most private one.  To me, the worst one of the bunch is #908 as if you are walking to #909, you can actually see into #908's pool.  Although I have to think that particular pathway is used seldomly.  I had the pleasure to stay at both #909 and #910.  While #909 is most private of the three, people staying in the Estate lodges can actually look into your pool from afar.  However, because the way #910 is situated, even though you are more or less right on the beach, you can literally swim naked in the pool and no one can see that.  My favorite villa is #910 as it has easy access to the beach and at the same time, the private pool is private when you are in it.  I believe the layout for all the villas are the same and it's laid out beautifully.  The only thing I wish they would change is the outdoor shower only spew out cold water so it's really more about washing chlorine off you than being an actual usable outdoor shower (unless you like taking cold showers).

The public area is quite nice.  The newly renovated pool is huge.  They serve food on the lounge next to the pool.  There is also a restaurant called Pla Pla next to the pool.  It's mostly continental food like burgers, pasta, and such.  If you want Thai food, you have to go up to Thai Kitchen up in the high point of the resort.  The Thai Kitchen can cook anything you want.  I ordered some Thai food that was not on the menu and chef was able to make them easily.  The Health Club is also on a high point so when you do your cardio on a machine, you have a beautiful view of Siam bay.  There is also a boxing area where you can see the other side of the island.  I would say Spa is their weakest point for me.  I got a Thai massage which was good but what's not good about it is the long trek I had to make from the spa reception area to the massage room.  You have to walk outside through jungle on a path that goes up and down.  Normally I don't mind going up and down stairs to reach a destination but after I got a massage, I'm relaxed and the last thing I want to do is trek up and down stairs to go back to the reception area.  When I complained, the receptionist said that they also do in villa treatments too.  So that's what I would recommend, have them come to your villa.

The time I was there happened to be Easter so there were a lot of families in the resort.  Luckily most of the kids are well behaved so I didn't hear a lot of nagging and crying sound.  My guess is Four Seasons wants the family crowd.  I believe there is also a kids play area right under the gym.  I wouldn't necessarily dissuade honeymooners from going to this resort but do make sure you pick the time when kids are in school if you want to avoid them.

There are a lot of water sports activities you can do at the resort.   There are plenty of two person boats, several paddle boards, two water bicycles, etc.  Water is quite shallow overall until you pass the reefs.  There is a resort owned barge pass the reefs where you can put on snorkeling gear.  There are definitely fishes out there but I would say I saw more fishes at Hanauma Bay in Hawaii or Blue Lagoon in Bali.  But this one is right at the resort which is definitely more convenient than the other two.

Couple precautions.... If you hate the sound of cicadas, then this is not the resort for you. The sound comes and go and sometimes can be very loud.  To me that's just part of the nature as we are in a jungle but if that sound really bothers you, then you will have a miserable time if you come here. Also there are definitely mosquito at the resort.  They do provide you with natural and regular sprays but I would suggest you bring your own as you may be allergic to their spray.  And lastly, because Koh Samui is in a bay so don't expect waves.  If you want waves, go to Phuket.  The plus side of being in a bay is that chance of tsunami is very slim.

Overall I would highly recommend this resort to anyone especially if you are very particular about service standard.  Again, I have never encounter such excellent service and don't expect to encounter that again until I return to this Four Seasons Resort.