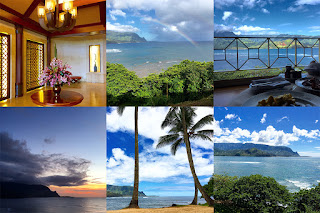 Just came back from St Regis at Princeville.  Had a great time.  The resort was quite nice although they really could use some improvements.... some simple, some not so simple.

This was my first time on Kauai.  I've been to the Big Island and Oahu before so Hawaii is not foreign to me.  However, many people said Kauai is the prettiest so of course I have to see it for myself.  I have never stayed at St Regis hotel chain before although the lobby of St Regis in San Francisco is quite chic so my expectation was high.  My understanding is that if one were to go to Kauai, St Regis was the place to stay.  A close second would be the Grand Hyatt Kauai Resort & Spa.  Having stayed at both during this trip, I would say St Regis Princeville is definitely better than Grand Hyatt Kauai.

First, a little 411 about Princeville.  It was named after Prince Albert Kamehameha when he paid a visit at Hanalei Bay in 1860.  This location is also used as the back drop for Hollywood film South Pacific in 1958.  You can actually see the exact same trees in the movie that still exist today at St Regis Princeville's beach.  In addition, the legend has it that the song Puff the Magic Dragon by Peter Yarrow and Leonard Lipton, was about Hanalei Bay with red part of the mountain as dragon eyes and Na Molokama mountain range as its spine.  The mythical land called Honah Lee refers to the town Hanalei, a stone throw from St Regis Princeville.

The pluses at St Regis Princeville: location, amenities, and the crowd.

St Regis Princeville is located at Hanalei Bay.  Having stayed at places like Four Seasons Koh Samui, Amankila in Bali, Aman Sveti Stefan in Montenegro, etc.  I would say the view of Hanalei Bay was the best.  The reason is with places like Four Seasons Koh Samui or Amankila in Bali, you get palm trees and white sandy beaches (or in Amankila's case, black sand beach), but at Hanalei Bay, you get all that plus Na Molokama mountain in the background.  Or shall I say icing on the cake!  The view is tranquil yet majestic.  Waking up daily to the view is just incredible.

There are lots to do around St Regis Princeville.  Some of the onsite amenities include snorkeling, kayaking, and hiking.  There are lots of coral reefs in the Hanalei Bay.  I would say it's actually not too safe to do regular swimming as there are just too many corals around to do laps.  If you like snorkeling, this is a very good place to be.  There is a desk next to the beach where you can rent paddle boards, kayak, or snorkel gear.  They charge by the hour (Four Seasons Koh Samui include these amenities in room rate... cough cough).  The fish is not as abundant as Hanauma Bay in Oahu or Blue Lagoon in Bali.  With that said, it's a lot more convenient to snorkel when your hotel room is few feet away.  There are definitely more fish (interesting ones too) when compare to Four Seasons Koh Samui which also have onsite snorkeling.  Some people saw turtles... I didn't unfortunately.

Another good amenity at St Regis Princeville is their Kauai Grill restaurant by Jean-Georges.  Possibly the best lunch I ever had was at Jean-Georges in NYC so I had high expectations for Kauai Grill.  I was not disappointed.  My surf and turf entree was cooked to perfection.  The maitre d' knew it was my birthday so they send a moist and delectable chocolate cake on the house for dessert.  A perfect way to end the dinner.  I would come back here again.  By the way, they require you to wear long pants and dress shirt at this restaurant.  Don't mind that as everyone was wearing t shirts and shorts.

When comparing this resort to others ones such as Four Seasons Koh Samui, or Four Seasons Haulalai on Big Island, this St Regis just looked tired.  The architecture had not been updated since the 80s and it showed.  The finishes in guest rooms looked like something out of 80s/90s/ and 2000s and we are already halfway pass 2010s.  Lounge chairs on the beach look like something right out of 1980s sitcom.  I stayed at St Regis Ocean View Suite and the marble in the bathroom was green.... Alexis Carrington called and she wants those marble back!  What Starwood Property really need to do is revamp this whole hotel.  The location is magnificent but the physical plant is not.  With that said, I have a feeling that Starwood is going to milk this property dry until Four Seasons finally put a resort on Kauai.  Better yet, Starwood should sell this resort to Four Seasons as I'm sure Four Seasons will do a phenomenal job at this resort.  I mean just look at what they did to the Four Seasons Lanai... it went from a tired 1980 resort not too long ago to a modern day rock star!

The weather is another ding against this resort.  I was told summer is the drier months at this location and it rained every single day when I was there.  Rain usually does not last long....sometimes ten minutes...sometimes thirty minutes.  Only one day was more or less all day.  You rarely see sky without any clouds.  In fact, clouds typically linger around Na Molokama mountain range while Hanalei bay is usually fairly sunny.  A bit odd but as long as the clouds don't interrupt my sunbathing, I'm fine with them.  If you are planning to be here during the raining season, you may want to think twice.

If you are staying at the suite level, you will get a butler.  What's great about St Regis butler service is that they will come and unpack and pack for you.  For some people, that's a huge plus.  In addition, they will iron your clothes.  That's a big plus in my book although I'm in Hawaii so not exactly useful.  Moreover, they will bring freshly brewed Kona coffee to you anytime you want.  Most places when they say they serve Kona coffee, it just means Kona coffee is part of the blend.  But not here.  Your butler will bring 100% Kona coffee to you and it's heavenly!  My mouth is watering just thinking about it.  Lastly, your butler can really enhance your cultural experience here on Kauai.  The odd thing about this St Regis is that some of the staff are very friendly while others don't smile at you at all (somehow St Regis didn't train them right... but that's a different complaint).  We had the fortune to have Robert as our butler.  He's the head butler at this St Regis and I can see why.  I honestly think that St Regis does not deserve to have him as their head butler.  He's exceptionally wonderful and kind and dedicated to his job.  If Four Seasons ever opens a resort on Kauai, Robert is the guy to train all your staff.  He's worth every single penny and then some.  Robert took time to explain to me about the culture and history of Kauai.  He advised me where to go for a great authentic luau.  He even planned a lei making session as well as Hawaiian dance session for me.  I can honestly say besides the great view, Robert was the second best thing at St Regis.

I really enjoyed my time at St Regis Princeville.  There are definitely cons to be had (mainly the dated facility while paying high prices).  I'm crossing my fingers that next time when I return, I will see a beautifully remodeled resort.  Until then, mahalo.

Posted by Purefecto at 6:49 PM