The best Four Seasons Resort ever? 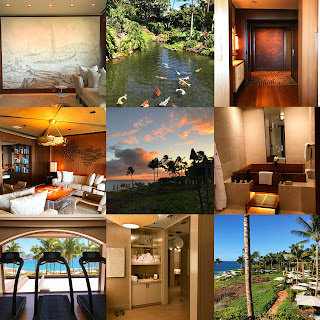 Four Seasons Lana'i really has it made in many aspects.  First, it has an owner who is ultra wealthy and looking at this Four Seasons as his vanity project (ie. return isn't that important but showing off is).  Secondly, it has a gorgeous setting that's hard to replicate.  Lastly, it is in a location that has access to great staff.

As many of you may know, Four Seasons Lana'i is own by Larry Ellison.  What this means is he has oodles of money to spend on sprucing up Lana'i if he wants to and thankfully for me, he did.  In general, Four Seasons lobbies are very grand.  They are very good at setting the tone of luxury.  However, when you step into your room, let's just say sometimes it can be a let down.  Again, I would refer this back to Palo Alto Four Seasons (let me beat this dead horse again).  Lana'i Four Seasons' finishes is unparalleled to any other Four Seasons I've been to.  They use Neorest Toto toilet in every guest room!  Most hotel only reserve a $5k toilet for their presidential suites if that.  But here we have $5k toilets even for cheapest rooms.  This is absolutely unheard of.  This kind of lavish detail tells you the amount of money that was spent on sprucing up this resort.

I was lucky to stay at their Alii Royal Suite and I honestly did not want to leave.  This suite is basically Four Seasons Lana'i's highest category suite.... even higher than their presidential suite.  Alii Royal suite can be either one bedroom or two (connecting room next door can be made available).  I have stayed at places that have similar level of opulence such as Cheval Blanc Randheli or the Brando in Tahiti.  But the amount of space and custom details made my stay at Four Seasons Lana'i the most opulent hotel suite I had the pleasure to stay in.  Everything about the suite is gorgeous;  from the beautiful handmade Nepalese Lokta wallpaper to gorgeous museum worthy artwork on walls.  My favorite is the Dietrich Varez wallpaper in the closet anteroom.  Yes, you read that correctly.... there is an anteroom to go to the closet room which is as big as a studios in NYC.  A steam bath is incorporated into a large two person shower room.  Oh and did I mention there is a two person Japanese tub in the bathroom as well.  I'm not a tub person but I did take a nice long bath in that tub.  It was heavenly.  And of course let's not forget about the amazing ocean front view off the living room, dining room, media room, and master bedroom.  Yes, count them... four lanais.  The suite also comes with a library but I didn't spend any time in there as I was too busy looking out the window.  Just in case you don't want to look at TV in your master bedroom, they mounted a hidden TV in the ceiling above your bed so you don't have to look at it unless you want to.  When I'm on vacation, I rarely watch TV but believe me, I watched TV a few times in bed.

While I can stay in Alii Royal suite and never leave, I did leave so I can enjoy rest of the resort.  There are few restaurants onsite.  I really liked Malibu Farm which came from Los Angeles.  Food is very fresh and tasty.  The Sports Bar and Grill has yummy salad and their poke bowl uses freshest tuna.  It was divine.   Nobu is always good... I wish it was Matsuhisa though which I like better.  The weakest link for me was One Forty.  The food was typical Four Seasons good.  It's competent food but not something to write home about.

Another thing I enjoyed about staying at a resort is experiencing their spa.  So naturally I have to hit up the one here.  Funny thing is they use exact same lockers as the ones at Four Seasons Bora Bora.  But I would say the spa is prettier here at Lana'i.  The one at Bora Bora is more rustic looking which it makes sense but personally I prefer a more luxe tailored looking spa.  There is the typical lockers, shower stalls, steam room, sauna room, and waiting area.  All very nicely furnished.  The spa room was adequately sized and my masseur was good.  One thing spa manager did which I really appreciate was he moved my masseur's meeting around to accommodate me.  I thought that was very consumer-centric move.  He could have easily left my original reservation time and I would had to come back later at a less optimal time for me.  So bravo to the manager at the spa.  And he is not the only one who went out of his way to make me feel cared for.  But more on that later.

Spa facility is actually very close to the hotel pools.  This resort has two pools.  One is family pool and the other one is adult pool.  They are not that far apart from each other but I suppose some foliage, walkway, and palm trees between them do serve some kind of separation.  The funny thing is I found the adult pool less serene as there were few frat boy types talking loudly and probably drunk on some of the day during my stay while the family pool only had one mom and her kid swimming quietly...  The later pool was definitely more relaxing.  For me though, I much rather go to a beach then jump into a pool.  Lana'i Four Seasons has a nice beach very close to the resort.  All Hawaiian beaches are public so we did run into several local people next to the Four Seasons beach.  However, because the population on Lanai is small, there isn't that many people on the beach so it felt fairly private.  If you are looking to snorkel, you have to go to the side that's farther away from the resort.  It's a five minute walk so you don't have to trek very far.  The snorkeling experience was good.  There were plenty of colorful fish and creatures in the water.  I was satisfied with what I saw. I would say it was comparable to other Hawaiian islands I've experienced.

If you are a gym junkie, then you are in luck as this resort has a very nice large gym.  It has free weights and assisted weight machines.  It's a proper gym which one normally don't get in a resort no matter how luxe the resort is.  Most places have an onsite gym as an afterthought.  This gym not only offer you lots of equipment, it even has free earphones in case you don't have one when you hop onto a cardio machine!  Now that's a first.  Oh, and it does have a very nice ocean view while you do your cardio to boot.  Makes doing cardio slightly less painful...

Lastly, the staff at Four Seasons Lanai was incredible.  The best Four Seasons Service I've experience was at Four Seasons Koh Samui.  That resort has 60 villas with 11 private residence rentals.  Lanai Four Seasons has a total of 213 rooms and I have to say they give the staff at Koh Samui a run for their money.  Everyone from resort manager David to beach boy was super nice and incredibly they all remember my name!!  It's one thing I'm at an Aman resort (which has 35 rooms or less) and people remembers me but it's another when the staff at the beach here asked me about how was my dinner last night at Lanai City Bar and Grill (a local restaurant in town) when I know the only other staff that know I went was the ambassador/ concierge at the front entrance.  It goes to show that every department in the hotel communicates with each other and they want to make sure you are absolutely taken care of down to the littlest details.  I'm impressed.  I don't know how they do it with so many rooms.  There is a saying that one of the best thing about being in Hawaii is the Ohana spirit that one comes across while in Hawaii.  I have to say Four Seasons Lana'i embraced that concept and then some.  I will be back.  This Four Seasons is the best Hawaiian Four Seasons bar none.  It would not surprise me if this is the best Four Seasons beach resort in the world.  Maybe someday I'll find out after I go to every single one of them.  In any case, I hope to return to this gorgeous respite soon.