The place to stay in Maui 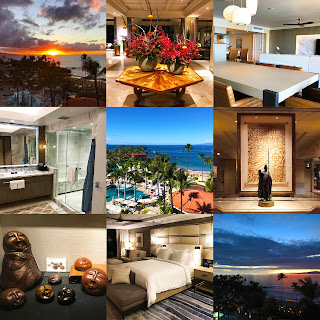 This Four Seasons has done many things right and just few things that needs some improvement.  To start, the layout of the hotel is a U shape.  What this means is that unless you are at the end of the U, or middle of the U, you will have side views to the ocean.  Not the end of the world but when one comes to Hawaii, naturally one wants to have ocean view to watch the sunset.  This shape of architecture is prevalent among many hotels here in Maui.  It's the easiest way to give everyone some ocean view while stacking up as many room as possible in a limited amount of space.  I'm sure it was thought through thoroughly by the building architect.  So if you want the best view, you will naturally have to pay a steep premium.  I do think for the product, the steepness of the price is on the high side.  A side note, if you want a quick access to the beach and restaurants, the rooms at the end of the U has the quickest access in addition to gorgeous views.  If you are at the middle of the U shape, it'll be a 10-15 minutes to trek to the beach.

My first impression of the lobby is nice and airy.  It exude graciousness like most Four Seasons resort I had the pleasure to stay at.  The overall ambiance is relaxed and calm.  There is actually another floor below the entrance which has spa, shops, and gym.  They have one of the nicer gym I've seen at a Four Seasons resort. It's quite large and there is a dedicated area for treadmills that look out toward the beach area.  Although I'm not sure if you can actually see the ocean from the treadmills or not.  I also did not use the spa service as I was too busy exploring the island.  So can't comment on the spa service either.

I would say food is Four Seasons good.  Meaning it's not bad but I certainly would not write home about it.  As can be expected, Spago was the best.  The worse food was Ferraro's Bar e Ristorante.  It has the best view of the ocean but I honestly cannot recommend anyone to eat there.  The pasta I had was overcooked and sauce was not good.  The in room breakfast was good.  There were lots of fresh juice choices.  A lot more than the Four Seasons at Lanai.  I think it's because Lanai has to import all their fruit whereas Maui has their own.

I stayed at the Elite suite which I highly recommend it.  Even though the website only has two bedroom or three bedroom options available, you can actually request for one bedroom option which is what I had.  The room was very modern which I liked and you can tell everything was quite new.  The finish of the furniture wasn't quite on the same level as my suite at Four Seasons Lanai but it was definitely one of the nicer suites I had at a Four Seasons resort.  The way this suite is set up, you can easily fit a family of four.  This suite actually has two full bathrooms so kids can sleep on sofa bed in the living room and have their own bathroom.  There is also a kitchenette with its own door that lead to hallway in case you decide to hire a caterer to host a party.  The master bathroom was basically lined with beautiful Carrara marble.  It looks very modern and luxurious.  The only criticism I have is that I wish the tub is a two person tub instead of just one.  There was definitely enough space to put a two person tub.  The best part of the suite was the lanai.  The sunset view at this resort is absolutely stunning.  Everyday I rush back to my suite at 5PM to take in the view.  The sunset view here definitely has Lanai Four Seasons beat.

You may have read that people complaint about having to rush down to the pool to reserve their chaise lounges early in the morning.  I find that a bit ridiculous as they should just do what Eden Rock does: each room comes with its own assigned chaise lounge.  I know this Four Seasons doesn't have enough chaise lounges for every room.  But I would think they should minimally assign chaise lounges for the residential suites.  After all, people at residential suites are paying a lot more than typical rooms at the resort and should not have to rush down early in the morning to snatch chaise lounges.  With that said, I don't particularly care for the swimming pool... I much rather go swim in the ocean.  The second best part of this resort is snorkeling with turtles.  I'm not sure why, the turtles come out en force to swim just right off the beach at Four Seasons Maui.  I must had swam with four five giant turtles.  One of them was bigger than me!  Crazy!  I can stay in that water swimming with those turtle for days.  But alas, all good things have to come to an end.

Unfortunately I had to say goodbye to this resort after five days.  I think if this was your first time at Maui, this Four Seasons is a terrific jumping off point.  The only thing that would give me any reservation about staying here would be the price. Vacationing in Hawaii is never cheap but the best rooms at this hotel will definitely cost you an arm and a leg.  Do look into their offers tab.  If you stay at a suite in the fall, you will get a nightly resort credit of $400 which will cover your breakfast and dinner (unless you get very expensive wine) during your stay.