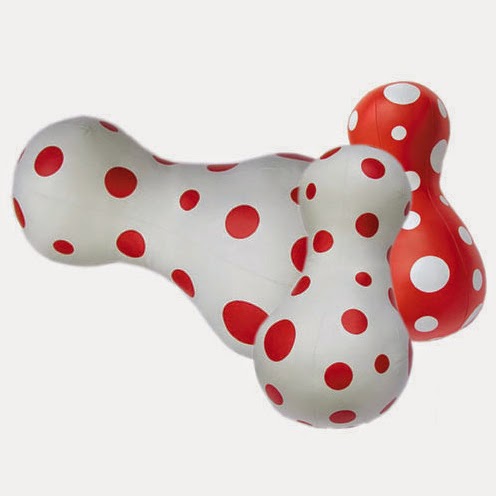 If there is one artist who is known for dots, it has to be Yayoi Kusama.  She obsessively puts dots everywhere.  And I mean EVERYWHERE!!!  She was originally born in Japan but moved to the States in 1958 to NYC.  In the 60s, she regularly exhibit along with Andy Warhol and Claes Oldenburg and her art was associated with Pop Art movement.  In 1973, she moved back to Japan and continue with her art as well as published several books.  In 1993, she represented Japan at the Venice Biennale.  She has been exhibited at MOMA, Tate Modern, Walker Art Center, LACMA, Centre Pompidou, and Whiteney Museum of American Art among others.   One of her artwork was sold for $5.1M recently which made her the highest auction record holder for a living female artist.  Luckily for us mere mortals, we can purchase her soft sculpture at Whitney for $350.  Pretty good deal if you ask me.