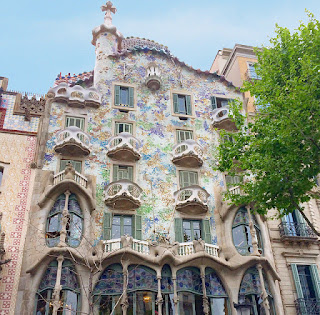 I had the pleasure to visit Casa Batllo recently.  I have to say it was as magical as I thought it would be.  I'm sure it was weird to the nth degree when it was first done back in 1904.  Today, it just looks like something out of Disneyland.... but of course we know Casa Batllo came before Disney!

This Art Nouveau building is actually a remodel and not a ground up structure by Gaudi.  This house represents Saint George's lance and slaying of the Dragon.  The end of the lance is represented by the cross on the roof and the roof tiles is reminiscent of scale of a dragon.

As anyone who have been to Casa Batllo can tell you, it is packed with people!  The tour starts at 9:00AM and ends at 9:00PM.  The building is open 365 days a year which is amazing!  There is a fast pass at 5 euro which allows you to skip the long line.  I think it really depends on what time you get there.  If you get there 10 minutes before 9AM, it doesn't make much sense to pay that extra 5 euro as there is also a line for the fast pass too!!!

In fact, I was in that fast pass line at 8:45 AM.  The good thing about the fast pass line is that you are the first few to get into the building which allows you to take pictures without zillions of people in it.  I think I was 7th or 8th person in line and I was able to run upstairs and click away without anyone in the photo!  After I took all the pictures I want, I went back down to the tour and listened to the audio guide.  But by that time, there were people everywhere and I was glad that I had the opportunity to take a lot of pictures when there were no one around.  They also give you a video guide which looks like one of those Samsung phone.  It's pretty cool as you can look through the screen and it would show what the place would have looked like back in Art Nouveau time.

The price of 26.50 euro was definitely not cheap to just walk through the house by yourself for maybe an hour at most but it's probably one of the most unique house in Spain that was built in early 20th century so I definitely think it is worthwhile.
Posted by Purefecto at 9:00 AM