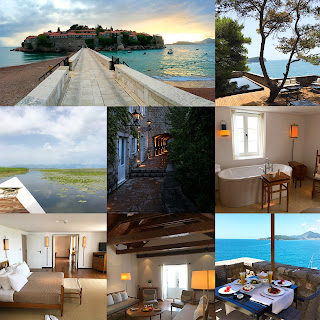 Just got back from Aman Sveti Stefan.  I have to say I'm a big fan of this Aman for several reasons.... Great service, Great food, and Great rooms.

Before heading there, my travel agent had said that several of her clients had not liked this particular Aman because they were bored.  Combining that with the reviews on Tripadvisor, I was somewhat hesitant about going there.  On the other hand, a friend of mine whom had done extensive travels throughout the world (over 100 countries by age of 40) had highly recommended this Aman as he said this resort was very unique among all Aman properties as it's an UNESCO World Heritage site.  So reluctantly I decided to stay there for 3 nights and 4 days hoping this resort will live up to Aman standard.

I was pleasantly surprised.  I wish I had stayed at least one more day if not two.  Although honestly I can stay there for few extra months in my gorgeous suite.... This Aman is on an island right off the coast of Montenegro.  The island is connected to the coast via a walkway so I guess it's really more like a peninsula than an island in my opinion.  Anyway, this island originally was a fisherman's island.  The legend has it that Pastrovici tribe robbed some sleeping Turks off a beach in Montenegro.  They used the money to build this village in 1400s.  By 1800s, the village had about 400 inhabitants.  During the communist era, the island was converted into an upscale hotel.  Famous visitors during this time included: Sophia Loren, Kirk Douglas, Elizabeth Taylor, and Princess Margaret.  In 2006, Montenegro became an independent country.  By this time, Sveti Stefan had fell into ruins as it had been neglected for awhile.  In 2007, the new government invited international hotels for bids to reinvigorate Sveti Stefan and Aman won the bid and signed a 30 year lease with the government of Montenegro.  Aman Sveti Stefan officially opened in 2009.

Most of the complaints on Tripadvisor had to do with service.  People complaint that while the staffs are nice, but their English are poor thus lots of miscommunications happened.  In typical Aman fashion, they like to hire locals as locals tend to stay at the hotel for extended period of time.  Aman Sveti Stefan was no different.  However, with that policy, I can see how the problems arise.  While I find most of the staffs' English proficient, there were couple instances where things were not done correctly either because of miscommunication.  But I think as time goes on, the staff there will get better and better.  I would say they are 95% there so good enough for me.

While you would think most of the rooms on Sveti Stefan faces Adriatic Ocean to the West, in fact, only four rooms faces West.  Most rooms face East with some facing South.  Few rooms face North as that's where main dining facility is at.  I stayed at the Adriatic Suite which was one category below the presidential suite (Sveti Stefan suite).  This particular suite is one of the view rooms that have west facing windows.  This room also has three different balconies with one facing Northwest which gets the sunset view whereas Sveti Stefan suite faces Southwest thus only gets sunrise view (and who gets up that early while on vacation anyway....).  The second balcony has direct access to the adult pool on the west side of the island.  The third balcony has two lounge chairs and is also quite private for sunbathing.

The Adriatic suite is actually two levels.  The bottom level has a kitchen plus access to one of the four rooms that has a West facing window thus making this a perfect family suite if you are traveling with your kids or other family members.  Outside the kitchen, there is a stair that leads to the upper level of the suite.  The upper level consist of a living room, a dining room, a powder room, and a master bedroom with a generous sized bathroom.  There are four access points to the Adriatic suite.  One is via kitchen.  The other three are through the balconies.

Aman Sveti Stefan actually consist of more than just rooms on the island; it also includes a villa on the mainland called Villa Milocer.  This villa used to be the summer palace for Tito, the communist dictator.  It has now been converted to 8 different suites.  The first floor is consist of public areas such as a restaurant, a library, a reception hall, and a meeting room.  Next to Villa Milocer (about 5 minutes walk), Aman constructed a series of spa buildings in the style of the Villa Milocer.  This collection of buildings has a spa, a gym, and a indoor/outdoor pool.  There are three different private beaches that Aman guests have access to (all of them rock beaches not sand).  The best one, in front of the spa buildings, is called Queen's beach and is the most private one of all three beaches as public has no access to it.  The second best one is called the King's beach and is in front of Villa Milocer.  This one is not particularly private as there is public access road that cut across the private beach and Villa Milocer.  So anyone walks pass the public road can see you.  The most public beach is the one in front of Sveti Stefan called Sveti Stefan beach.  If you are on the mainland facing the island, the right side of the beach is private and my understanding is public has access to it provide they are willing to pay a high premium.  The left side of the beach is public. Thus what you see is you have gazillion people using the left side and maybe one or two people on the right side.  Very weird and odd.  On the island, there are three pools.  One is inside the Sveti Stefan suite's terrace.  This is the only room that has a private pool.  The second one is called adult pool facing West.  Gorgeous view of the Adriatic Sea but it's small and not very deep.  The third one is right next to the main dining room.  Part of it is actually inside the building and part outside.  It's about twice as long as the adult pool.

On the island, there are four orthodox churches.  One was actually where Novak Djokovic, arguably one of the best tennis player ever, got married.  All the churches are quite small and the one that Novak got married in can perhaps fit 15 people at most.  There aren't many original icon paintings inside the churches.  I assume those had been moved to churches on the mainland or museums.

The main dining room (which has inside and outside seating) serves Montenegrin/ European food fare.  There are a good selection of seafood (no surprise here).  Another restaurant is located at the piazza which serves Italian food.  Montenegrins actually make good Italian food as Montenegro used to be ruled by the Venetian Empire.  The third option is at Villa Milocer on the mainland.  I had a fish soup there once during lunch and was very surprised at how good the soup is.  The soup has lots of complexity to it and is comparable to any one Michelin star restaurant.  It's that good.

While I was at the resort, I signed up for two activities.  One is to the Skadar Lake.  This one is not to be missed as the lake is just stunning... especially when you pass through thousands of lily leaves to get to the center of the lake.  There are tons of birds flying around.  The water is also very clean.  They have a mirror look to them.  Hard to explain as you have to see it in person.  The second activity was a trip to Kotor and Perast city.  Both are located on a fjord.  This fjord is unique as it was not made by glacier (like the ones in Norway) but by rain.  Kotor is the bigger city of the two and has various architectural styles (think French and Italian) from different centuries.  I wish I had more time to spend at both cities...very unique setting.  One thing that is missing is cultural activities on the Aman activity menu.  For example, when I was at Amanjiwo, I had a chance to listen to Buddhist monks chanting at a local temple.  I would have loved to visit a local traditional Montenegrin home and experience Montenegro through Montenegrin eyes.  To me that would be quite interesting.  My understanding is the new general manager is planning more activities in near future.

Overall I would highly recommend this unique Aman property.  This is one of the few Aman properties where each room is different.  I feel as this resort ages, it'll get better.  My understanding is that the general manager at Amanpulo had recently been reassigned to Aman Sveti Stefan.  Given all the rave reviews I read of Amanpulo, I have no doubt in a year, people will be raving about Aman Sveti Stefan as well.  I look forward to return to Aman Sveti Stefan again soon.