A stroll through the New SFMOMA 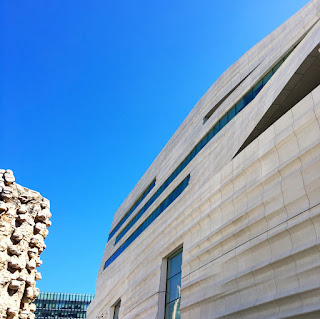 SFMOMA had not been opened for that long but it certainly had made plenty of headlines.  The new addition done by Snohetta, next to the iconic Mario Botta cylinder, is beautiful.  But how well does the new addition talks to the original building is whole another matter.

I visited the museum couple months ago.  I was very excited as I missed looking at modern art here in SF and was eager to have them back into my life.  Having another world class building in SF is equally exciting and I was looking forward to see how Snohetta gel the old space and new space together.  Furthermore, I was looking to see how the existing collection speaks to the Fisher collection.

As I approach the museum on 3rd street from Folsom street, I wasn't sure if I was suppose to into the building from the old entrance via Botta's building or there seem to be another entrance right on Howard Street.  I took a chance to walk into a gap on Howard Street hoping I do not have to backtrack to the original entrance by Botta on 3rd street.  As luck would have it, looks like there is an entrance on Howard street although I did have to climb few stairs up.

Right near the entrance there is a giant sculpture by Richard Serra that reminded me of the one I saw at Bilbao's Guggenheim Museum.  I was happy to finally see one here in San Francisco.  Getting a ticket was easy and I got an audio headset to help me understand the collection better.  Off I go.

I took an elevator all the way to the top and start going from top to bottom.  The Fisher collection in the new building was impressive.  It basically has who's who of modern art.... from Alexander Calder to Gerhard Richter, from Chuck Close to Andy Warhol.  However, I'm not seeing any of the paintings that were in the old Botta building.  With the incredible collection from Fisher, SFMOMA's modern art collection will be elevated to second best Modern Art collection in the world but where are old paintings???

Finally I came down in the new building far enough that now it is connecting to the old building.  There is a stark difference between the old and new building.  I would think they minimally refreshed the old building to make it look more cohesive with the new one.  Well, maybe they ran out of money because nothing was done.  A good addition will make you feel the two buildings came together as one.  This one, unfortunately feels like two separate buildings that desperately want to get away from each other.  There is a stark contrast between new part and old part.  And the old SFMOMA collection are all hiding in the Botta building.  I came to realization that essentially the Snohetta building is the Fisher wing of SFMOMA.  There is no flow between the collection which begs one to wonder why doesn't Fisher just open their own museum and call it a day?  Why do they want to be under the SFMOMA moniker and then essentially want nothing to do with the existing collection?  Just seem so odd to me.

I have to say I was happy to see the new addition but sad to see how separate it is.  SFMOMA right now is in a no men's land.  The experience of viewing the collection as a whole is disjointed and the experience of walking through the old and new space is odd too.  I guess that's what happen when you want a highly valuable collection to join the museum....you are at their mercy.  According to SF Chronicle, SFMOMA won't be owning the collection down the line either.  It's all on loan from the Fisher Art Foundation.  Although the loan is 100 years long and can be renewed at 25 year increment after, makes you wonder are all those art loans from Fisher family worth it for SFMOMA to bend forward and backwards for them?