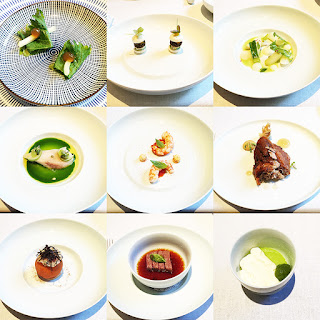 According to S. Pellegrino's the World's 50 Best restaurant list, Restaurant Tim Raue is ranked number 34 this year.  This restaurant in Berlin, Germany, is the highest ranking German restaurant on the list and recipient of two Michelin stars.  So when I had a chance to travel to Berlin, I knew I had to stop by.  And boy was I glad I did.

The decor of the restaurant is nice and simple.  Couple birdcages at the entrance to give an IndoChine vibe to the decor.  Menu was concise as well.  The tasting menu I had consists of 6 small dishes of chef's compliments.  Those were delicious... lots of Asian flavors one would associate with Southeast Asia.  The first dish was a carefully composed Imperial Caviar that looks like delicate macaroons.  Let's just say they melted in my mouth in a New York second.  The second dish was White Asparagus.  Tasted like spring to me!  After that was Hamachi.  Perfectly cooked.  Then came the prawn.  The tomato sauce was amazing.  I wanted to lick the plate.  The fifth dish was the suckling pig.  This was unfortunately a miss for me.  The pig was dried out.  Luckily the next dish, Dim Sum Duck, which was his version of deconstructed Cantonese soup dumpling, was brilliant.  I thought to myself all is well with this dinner.  I was a bit worry it was all going downhill after the pig.  Disaster averted!  Then came the super tender Shabu Shabu Wagyu dish.  The beef literally melted on my tongue!  Hands down the best dish of the night for me.  Then we had a green tea palate cleanser before the last dish which was a Calpico flavored dragon!  I love my Calpico.  I always drink it whenever I'm in Asia.  This was a perfect ending to a wonderful dinner.

This restaurant has to be on any foodie's list.  I know where I'm eating when I return to Berlin.  In the mean time, I'll just have to make due with his dessert dish at In Situ restaurant here in San Francisco.
Posted by Purefecto at 9:00 AM