The best hotel in the fable land of El Dorado 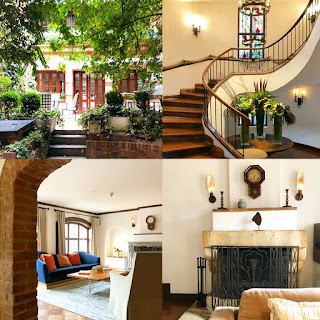 I had really low expectation coming to Colombia.  I knew it had a lot of drug trafficking problems in the past as well as kidnapping.  I heard it had been cleaned up but who knows?  I knew the best way to get home from my long trip in South America was taking the Avianca flight from Bogota to LAX.  Plus there are two Four Seasons hotels in town.  How bad can it be?

To my great surprise, Bogota was not bad at all!  In fact, I know for sure on my way to finally get to Machu Picchu someday, I will use Bogota as a jumping off point not Lima (since there is a nonstop flight from Bogota to Cusco).  Bogota is at 8,660 ft high so this is actually a good city to acclimatize oneself to high altitude before heading to Cusco at 11,152 ft high.  To give you a reference point, Denver is 5280 ft high.

I stayed at the Penthouse Suite which was where Mick Jagger stayed when he visited Bogota couple years back.  The suite is essentially divided into three areas.  You have a fully functional kitchen, a living room/ dining room combo, and a master bedroom.  There are two full baths in the suite so if you are traveling with kids, this can work quite well as the kids can sleep in the living room while parents sleep in the bedroom.  There is also a large walk in closet in the master bedroom and a large desk and chair in the entrance hall.  Because the hotel is a historical building, so central air is not allowed in the rooms.  However, Bogota temperature is quite similar to San Francisco meaning it's never too hot during day time and at night time temperature tends to fall to high 40s so the rooms stay relatively cool even without air condition.  My understanding is Four Seasons Casa Medina is still trying to install central air system so perhaps when you visit in the future, it would be installed.

I thought the location of the hotel was good.  Sure, it's not next to all the tourist trap areas so you can't just walk to different landmarks but it's only about a quick 25-30 minutes car ride.  I like the fact that hotel is actually in a fine dinning section of the city so you can stroll to many restaurants without having to hail a cab.  The food scene here reminded me of San Francisco ten years ago.  You can see proliferation of good solid restaurants popping up left and right and prices are definitely very very reasonable compare to San Francisco.

The staff at the Casa Medina was also some of the best I have encountered in South America.  The luxury tourism trade have not taken its roots here yet.  Having stayed at several "luxury" hotels in South America, the service standard is definitely below what one would get in Europe or Asia.  The Four Seasons in Bogota and Buenos Aires suffer the same fate.  Don't expect to have topnotch service as it doesn't exist in South America.  With that said, Casa Medina probably has the most polished service staff I came across in this part of the world with the exception of Awasi Patagonia which was better.

Overall I would highly recommend this Four Seasons in Bogota.  I find the service standard quite good, location ideal, and room comfortable.  I would not hesitate to return here again or recommend this hotel to friends.