Where to stay at the second highest capital in the world? 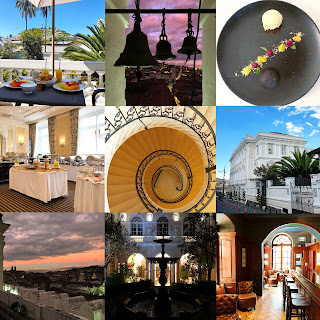 If you know your trivia, you would know the answer to the question: Quito.  Most people see this city as the jumping off point to Galapagos Islands.  I thought of the same thing as well.  But boy, was I wrong.

The only luxury hotel in this town is Casa Gangotena.  This boutique hotel used to be a private home for Gangotena family.  The house was rebuilt in the 1920s as the previous one was burn to the ground by a lover of one of the family's daughters.  The location of the hotel is perfect: right in the heart of this UNESCO world heritage site.  Quito is actually one of the first city to get that designation in 1978 from UNESCO and for good reason; walking around the historic downtown it's like stepping back in time to 17th century Spain.

The location of the hotel is unbeatable if you are looking to immerse yourself with the Quito culture.  It's literally a stone throw from one of the most important church in town: San Francisco monastery.  In fact, one of the perks at staying at Casa Gangotena is that you can get a private tour of the SF monastery with one of the Franciscan friar!  The friar who took me around was so knowledgeable about the history of the monastery as well as Quito in general.  He was such a joy to spend time with.  Another perk staying at Casa Gangotena is you get free entry into Pre-Columbian Art Museum across the alley from the hotel.  Someone spend a lot of money on that museum as it's as well designed and finished as any museum in the world.  I mean we are talking about Getty museum level of finish.  Very impressive.

But back to the hotel.  The hotel public area is grand and stylish.  It retained its old world charm without looking dated.  The room I stayed in was their balcony junior suite.  It's probably the nicest room in the hotel.  They don't really have any presidential suites and the best they have is connecting two rooms via end of a hallway type of suite.  So not a true proper suite.  There is actually two Jr Suites on premise.  One is larger and in the back... presumably more insulated from noise from the street but also doesn't get as much light and does not have a balcony.  The Jr Suite with balcony is bright and airy with a nice large balcony to take breakfast in.  But its bathroom is right on the alley and sometimes when stores in the alleyway start to blast music, you can hear it right through walls and windows.  I ended up taking the Jr Suite with balcony.  Honestly, it's a bit cramped from what I'm used to and constant noise from the alley or other parts of the hotel makes me give this hotel a four stars instead of five.

Service is fine at this hotel.  I think there are some sophistication with their service ethics but it's not quite there.  The intentions are there but Four Seasons in Asia or Amans in general would blow this place out of water.  I would say the staffs are quite friendly but not anticipatory.

Food at this hotel is definitely better than any you would find in the historical center.  I had several meals outside thinking it would be better.  It wasn't.  Just eat in the hotel before you go out.  In this respect, it's very similar to Asia... meaning best restaurants tend to be inside luxury hotels.  The Sunday brunch at the hotel is quite lovely... they have a big spread of food.  The tasting menu at the hotel restaurant is not bad.  I would say it's slightly below bib gourmand level.  It's also quite cheap so one can't complain.

Few precautions before coming to this hotel, because Quito is so high up, I would stay around the hotel for a day or two before start to seriously trekking around the historical center.  You can easily get altitude sickness if you go up and down this hilly historical area.

Overall it's a lovely hotel.  But don't expect Four Seasons level luxury as it's not quite there.  With that said, my stay here was comfortable for the most part and I would recommend anyone coming to Quito to stay at Casa Gangotena.  One should stay at least a three full day if not four as there are quite a few things to see around Quito not just the historical downtown area.  Plus you need at least a day to adjust to the altitude.  Definitely leave the teleferico cable car ride to the day before you leave as it's over two miles high when you reach the top.  You definitely want to be adjusted to the altitude before you take the ride.
Posted by Purefecto at 9:00 AM