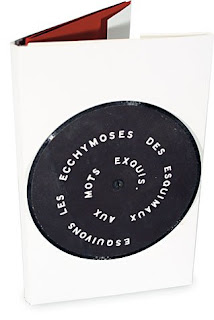 What's S.M.S. you ask?  It stands for Shit Must Stop!  According to Thomas Hill of Vassar College "At the height of the global political and social upheavals of the 1960’s, the American surrealist painter and art dealer William Copley published an unusual periodical entitled S.M.S., which informally stood for “Shit Must Stop.”  Inspired by Dada and the anti-commercial, merged-media ethos of the Fluxus movement, the publication consisted of a series of six 7 x 11-inch cardboard portfolios published bimonthly between February and December of 1968.  Each portfolio contained seven to fourteen multiples by different artists, and included works of widely divergent materials and techniques, from constructions and printed matter to photographs, prints, drawings, and sound recordings."

William paid every contributing artist $100 as payment regardless how famous the artist was and each piece of art work was reproduced 2000 times by The Letter Edged in Black Press. Only 100 of the 2000 copies were signed by its original artists.  Some of the contributing artists were Marcel Duchamp, Roy Lichtenstein, Man Ray, Christo, Richard Hamilton, Claes Oldenberg, John Cage, Terry Riley, and Yoko Ono.

Although decidedly utopian in concept and lasting only six issues, the publication included contri-butions from Copley’s surrealist friends and representatives from almost every art movement that was vying for public attention at that time: the Fluxus artists, pop artists, minimalist artists, colour field artists, conceptual artists and even the work of Congo the chimpanzee, whose paintings were introduced to the art world by the writer Desmond Morris and were the subject of hilarious debate concerning the validity of abstract art. As the title implied, ‘SMS’ was a reaction against the elitism of the art world in which reputations were made and destroyed by a small clique of dealers, critics and curators. It was the initiative of an artist idealistically striving to provide artists with direct access to a public audience.

After six issues, William had to stop because the cost of reproducing these artwork was exceedingly expensive (for example to recreate Burned Bow Tie by Lil Picard, Black Press had to torn up each bow tie by hand and burn them).  Today, you can have a piece of S.M.S for as little as $42.50 from New Museum in NYC if you are a member.  For measly $300, you can have a Marcel Duchamp art piece on your wall.  Yes, THE Marcel Duchamp.  How crazy is that!?
Posted by Purefecto at 9:00 AM