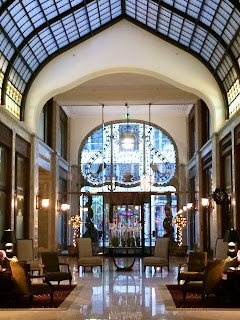 With plethora of luxury hotels in the world, one of the hotel that consistently ranks in the top 10 in Conde Nast Traveler magazine is Four Seasons Hotel Gresham Palace in Budapest.  I can see why.  Like all Four Seasons Hotel world wide, you get top notch services but this particular one, really go out of their way to make you feel cuddled.  I really felt cared for when I stayed here.  Without a doubt, I would rank this as one of the top three hotel I have ever stayed at.

First, the hotel is absolutely gorgeous.  Unlike most Four Seasons Hotels around the world, this one is special as it's historical in comparison.  I believe it was built during Art Nouveau period and it definitely looks it.  While I appreciate other Four Seasons Hotels like the one in New York city that was designed by I.M Pei, there is just something more special about staying at a 'palace'.

Second, the food is top notch.  I would say the bar food I had was just as good as the ones I would get at any other Four Seasons hotel.

Third, the service was just unbelievable.  They really go out of their way to make you feel special.  Every night they leave several petite fours as a night cap when they do turn down service.  These petite fours are restaurant level not some stale day old left over from their restaurant downstairs.  The night before I checked out of the hotel, they left plastic zip lock bags for my toiletry.  I have never seen that before in any hotel stay.  While it's only a plastic bag, but it felt they really thought about all their guests' needs.  Budapest also is known for theirs thermal baths around town.  This Four Seasons hotel gives out free prep bags with various amenities such as slippers, towels, lotions, etc. for their guests to take to baths.  How thoughtful is that?!

If you visit Budapest and stay here, definitely make sure you pay the extra bucks to face the Chain Bridge side of the hotel.  I see some of the rooms face side streets or interior courtyard.  Personally I feel if you are flying all the way across the world to go to Budapest, you might as well stay in a viewed room.  Interestingly, the hotel has a mezzanine floor so if your room is on the 1st floor, that means it's actually on the 3rd floor (in American term since 1st floor in Europe is American second floor).  My room was on the 3rd floor which means it's actually 5th floor.  With double pane windows and french doors, even though I was facing the busier street in front, my room was rather quiet.