Probably the most dated hotel I have ever stayed at! 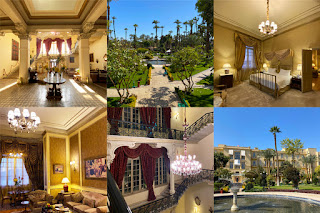 Sofitel Winter Palace at Luxor is not a hotel I would particularly recommend.  The only two redeeming part of the hotel is the lovely garden and my butler.  The hotel has long passed its prime and is in need of a makeover.

My understanding is that this particular Sofitel was going to be renovated in 2011.  Unfortunately Egypt had a revolution before the renovation can be started.  Since the revolution, tourism trade had  been in a dire straight until two years when tourists start to come back to Egypt.  Hence the hopeless situation that Sofitel Winter Palace is in.  Now with Coronavirus all over the world with tourism being decimated everywhere, I'm sure any plan to renovated this Sofitel has been postponed to many more years down the road.

While looking on the website, it was clear that the hotel was going to be dated.  But I thought to myself how bad can it be?  Well, let's just say 1980s is calling and they want their furniture back!  I had booked Opera Suite which is their highest category suite available.  The space is quite grand and I can see when renovated, it can exude luxury as it has a great bone.  Unfortunately currently it looks like a faded movie star home who has no more money to upkeep it.  In another words, it just looks sad and joyless.  The curtain doesn't even have a blackout drape so you better be up when sun rises.  The bathroom, while quite large, looks like a set from TV show Dynasty.  It was usable but it just all look so dated.  Apparently this suite is a two bedroom suite which I had somehow misread on their website.  So if you are there with two kids, it's actually quite economical to get this suite.  The other bedroom also comes with its own full bathroom and exit door.  The bedrooms are connected by a living room in the middle.

The hotel has several restaurants.  The best one is the outdoor BBQ one in the garden.  They serve regular Egyptian food which is fresh and delectable.  By the pool there is a cafe where one can be typical international food like a hamburger which I had one and would have it again in lieu of dinners I had onsite.  I ate dinner at two separate venues inside the hotel.  One is regular international fare and the other is French.  I'm sad to say both are at American diner level quality.  I mean yes, food is digestible, but why would I want to pay $30 - $40 per dish for something that taste like this??? I would much prefer the burger I had at lunch in the garden.  I would recommend no one to eat inside the hotel.  The quality of the food does not match with the price.  I have no problem paying for delectable food but this ain't it!  My understanding is since 2011 revolution, jobs were lost due to zero tourists.  Thus most of the top chefs in Egypt went to Dubai which lead to dismal food at this Sofitel (except the ones in the garden).

My suite came with a butler and he was THE saving grace for this hotel.  He clearly went to a British butler school as he knew exactly what he was doing.  He was the best thing this hotel has going for them.  Clothes were pressed to perfection, laundry were done in a timely manner, he even waited outside my door daily so I didn't have to wait long when I telephone him for service.  He was fantastic.

It is quite sad that this hotel wasn't renovated back in 2011; it would have been quite a spectacular property today in this gorgeous ancient city.  The ground is pretty, the architecture is beautiful, and location is good.  I hope Egyptian government (who own this hotel) will put money into this property when they finish the new Egyptian Museum in Cairo.  Luxor deserves to have a spectacular hotel.  I hope to visit this hotel again once it is renovated in the future.