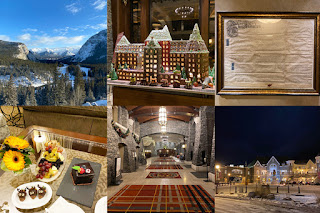 There is no doubt that Fairmont Banff rooms need some RnR.  I believe only certain gold level rooms are updated and rest of the rooms are tired for sure.  However, there is some charm to the old timey furniture in my suite that are reminiscent of a visit to grandma's home.  With that said, thankfully bathrooms are updated.  I had the pleasure to stay at room 611 which is the Rungius Suite.  The suite was named after Carl Rungius,  a German American painter, who spent his time painting western United States and Canada in the first half of 20th century.  In fact, Rungius had a studio in Banff that he kept until 1959, the year he died.  I can see why the suite was named after him as my room has a glorious view of Bow River and Mount Girouard.

The service is somewhat uneven.  Staying at a suite gives me access to their private concierge desk which is quite nice as they can basically make things happen even down to calling to get my rental car ready.  They really do try hard.  However, there were a few times balls were dropped.  But with that said, I would highly recommend staying at their Gold Level rooms as that gives you access to the private concierge desk.

Their spa was under renovation during my stay.  I had a manicure in basically one of the hotel rooms that were transformed into a spa room.  It was a bit disappointing as this hotel was known for the spa and I didn't really get to enjoy the facility.  I guess it's one of those I will need to return to see what the fuss is about!

Across the street from the main hotel is their convention center area.  In it, they have a theatre where the hotel put on A Christmas Carol production.  The production is small and set doesn't compare to broadway production for sure.  With that said, it was nicely done and I would highly recommend it for anyone who comes to Banff over winter holidays.  It puts one in a nice holiday mood for sure.

I didn't eat on site most of the time because the restaurants I was interested in was not open.  I think they rotate opening dates during winter time.  The only restaurant I ate at was The Vermillion Room.  The food was competent but nothing to write home about.  The decor was nicely done in a  French brasserie style.  Off site, I would recommend Three Ravens Restaurant and Eden at the Rimrock Hotel.  Three Ravens is more nouveau cuisine while Eden is traditional French.

Overall it was a nice stay and I would highly recommend anyone who's coming to Banff to stay at Fairmont Banff Springs during winter time.  While nothing will blow you out of water (except the view), everything was either nicely done or you can tell staff makes every effort to make things right and comfortable.  If I come back to Banff again, I would definitely stay here.
Posted by Purefecto at 12:17 PM