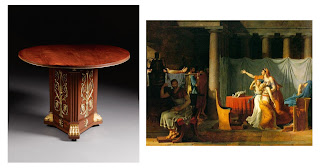 We all know Jacques-Louis David as one of the greatest French Empire painter but who knew he's a furniture designer as well!!!  This gorgeous mahogany table in the style of antique is made by one of the best furniture maker, Georges Jacob, during Louis XVI time in 1785-89.  It was kept by Jean-Louis David's family until middle of 1950s.  Apparently David used to design various furniture for usage in his paintings.  Naturally this table is of no exception; it made its appearance in the painting "Les Licteurs rapportent a Brutus les corps de ses fils", which now hangs in the Louvre Museum.  In the painting, the table in the middle is covered with a table cloth but the feet and gilt bronze decoration is identifiable to this mahogany table.  I just find it fascinating that this prop, for a very famous painting, can actually be identified over 200 years later!  Interestingly this table is in Empire style but made during the reign of Louis XVI.  It's probably the earliest Empire style (1800-1830) furniture ever made.  One can almost say David was a psychic!