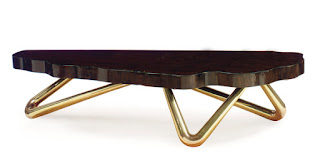 There are so many legendary interior designers that I admire and today I'll write about one of them: Billy Haines (January 2, 1900 – December 26, 1973).  His design, epitome of Hollywood Regency style, is very influential in today's interior design world and his furniture are still being reproduced and used by all top interior designers.

He was born in Virginia and moved to New York city by the time he turned 19.  He was discovered as part of MGM's "New Faces of 1922" contest and moved to Hollywood.  In 1926, he scored his first personal success with Brown of Harvard opposite Jack Pickford.  In the same year, he also met his partner for life James "Jimmie" Shields.  MGM made Haines to choose between a sham marriage or his relationship with Shields.  He chose the later and they remained together for close to 50 years.

Out of regular paycheck, Haines and Shields turn themselves into interior designers and antique dealers.  Their early clients were who's who of Hollywood stars: Carole Lombard, Marion Davies, Gloria Swanson, and Joan Crawford.  They had a very long successful business and some of their later clients reads like who's who of America: Betsy Bloomingdale, Reagans, and Walter Annenberg with their Sunnylands estate which is now act as a west coast "Camp David" and open to public tours.