Camping is never so glamorous 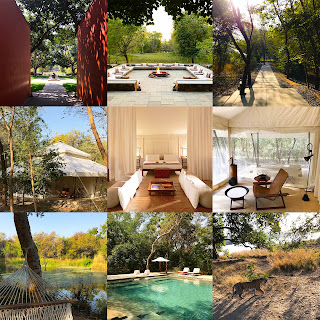 When I think of camping, I think of going to bathroom in bushes, jumping in a river to take a shower, huddling in a sleeping bag, and eating out of a can for dinner.  Well, if all camps look like Amanikhas, I can get use to camping very fast!  My stay at Amanikhas was extraordinary.

The camp is about 3.5 hours away from Jaipur.  While it's only about 100 miles away which normally would take you hour and a half in the US, but in India, you have to deal with cows sleeping on streets, goats frolicking along the side of roads, camels pulling carts, and slow trucks moving at glacier speed not to mention most of the roads are about 1.5 car wide so half of the time you are not fully on a paved roads that are full of potholes.  Sounds like I'm complaining.  I think at first it was fascinating.  Then it got old fast.  But later I got so used to it that it became somewhat charming.

Anyway, once you arrive at Amanikhas, GM and other staff as well as your personal butler will come to greet you with towels and drinks.  Your butler will take you to your tent and we took tent #1 because it's the most private and it didn't hurt to stay in the same tent as Katy Perry and Russell Brand when they had their honeymoon at Amanikhas.

Our tent was absolutely gorgeous.  First there is actually a foyer area where there is a table with chairs where you can eat your breakfast, lunch, and dinner on one side and a lounge chair with floor lamp on the other.  The foyer and rest of the tent is separated by canvas drapes to give you privacy in case you have foyer area's canvas rolled up.  Yes.  They thought of everything.  You can roll up the "wall" and just have bug netting separate you from outside.  This allow you to feel like you are outside without bugs flying all over you.  Once you pass through drapes, there is a huge leather cushion square sitting area where you can lounge or sleep on.  I suspect a lot of the mechanics are hidden under this huge ottoman.  The interior is basically separated into four areas once you pass the foyer.  The middle is a huge seating area/ daybed.  On the right is your bathroom with a working toilet behind canvas draping, a concrete tub that's set into ground, and a shower.  On the left is your closet plus two vanities where you can pretty yourself up.  It also has a hamper where you can throw all your clothes in and they will wash it and return it the very next day.  You can ask your butler to press anything you want so you can look dapper on your way into the safari park!  If you go forward pass the daybed, you will see a soft comfy king size bed.  The tent has several cleverly disguised air vents on the floor that regulate temperature inside your tent; so you are never too hot or too cold.  If not for the canvas wall, I would think I'm actually in a house not a tent!

Outside these amazing tents (and there are 10 total), there is a spa, a beautiful pond, an organic vegetable garden, an indoor dining room, a library with a shop, a fire pit, and a flower garden.  Let's just say even though I am in a tent camp, I can be pampered to the Nth degree if I choose to.  Make no mistake about it.

But let's face it, people don't come to Amanikhas so they can experience glamping.  They come because of the tigers in the Ranthambore Park.  Amanikhas is only few minutes away from the entrance.  You are required to reserve a guide, a driver, and a jeep to enter the park.  You are not allowed to drive your own car.  We were given an option of private or shared jeep outing before we arrive at Amanikhas.  We opted for two private and one shared outing during our stay.  Essentially you are paying for 6 seats if you opted for private or you paid for 2 seats as a couple if you decide to share.  You may get one other couple or two other couples.  It's random.  The park has 8 separate routes and you are assigned a route that morning.  If you had been to that route the day before, your safari guide can ask for a different route.  Besides the smaller jeeps, there is also 20 seater jeep which is obviously cheaper way to do safari.  The upside is you are higher up so presumably you can see further.  Downside to them is you are sharing a car with 19 other people plus some of the route only allow smaller jeeps as larger jeeps are just too big for some roads.  Furthermore, large jeep is less nimble so usually once someone spot a tiger, all other jeeps will magically know and rush over.  Big jeeps always ended up being the last ones to get to where tiger is and always stuck further back so harder to see tiger.  So if you can swing it, I would pick smaller jeep.  Outings are divided into mornings and afternoons.  When we were there, the morning outing was between 6:30-10:00 and afternoon outing was between 2:30-6:00.  Your guide as well as driver will not be allowed to come back to the park for several days if they don't leave by 10AM in the morning or 6PM in the afternoon.  Thus you usually see jeeps running for exit 15-20 minutes before 10AM and 6PM.

We were woken up very early by our butler.  He brought coffee as well as some pastries and off we went to our private jeep safari.  All the jeeps at Ranthambore is open air jeep.  We didn't bring thick jackets as it didn't occur to us it would be cold in India in late February.  We were a bit unprepared for how nippy morning temperature would be. Luckily Aman gave each of us a warm pack and a blanket so we don't freeze to death.  It's the touches like this that really separates Aman from other resorts.  I doubt other resorts in town give their guests blankets and warm packs when they go on these safari trips in mornings.  In addition, Aman also give us some snacks and bottle water.

We were lucky with our sightings during our first private jeep outing; we literally saw a tiger napping 40 minutes before 10AM.  We thought we weren't going to see any tigers... just monkeys, deers, birds, and crocodiles.  So we were definitely very happy to see a tiger in the wild even though it was for a short time and tiger was fairly far away.  Our second outing was in the afternoon.  This time we decided to share a jeep.  Luckily it was just two guests from the Sherbagh resort next door.  The lady of the couple actually was at Ranthambore over a decade ago and went on several of these outings but did not see any tigers.  Luckily, this time was different.  We actually saw two tigers.  One was far away and the other was up close.  She literally shed some tears as she finally saw them in the wild after all these years.  We were feeling quite lucky.  2 for 2.  Should we continue another safari outing?  Well, we decided why not.  We are here and when will be the next time for us come to see a wild tiger on the other side of the world?  We decided to go private again.  This time, we were extremely lucky.  I would say 20-30 minutes in and we spotted a female tiger napping next to a road!!  We were literally less than 10 feet away from this majestic tiger.  It was absolutely amazing.  The feeling of seeing a wild tiger in their habitat is exhilarating.  I don't quite know how to explaining it.  You just have to experience it for yourself.

Between safari trips, we spent rest of the time inside the tent camp.  The site itself is very pretty.  The pond in the middle shimmers during the day and there is a hammock where you can lay in it and read a book.  Or you can get a massage which is what I did.  The spa is also in a tent... well, a very nice luxurious large tent with multiple rooms.  Each room comes with a treatment room and a ensuite bathroom.  There is an organic vegetable garden one can visit.  Apparently that's where all the restaurant vegetable came from.

Speaking of restaurant... food at Amanikhas is just as good as food at Amanbagh.  While I was there, I did not see anyone ate inside the dining tent.  Everyone ate outside or in their tent.  One time we ate next to a pool while musicians played Indian music which was quite nice.  Another time we had lunch next to the beautiful pond.  With birds chirping in the background; it was heavenly.

A minute away from the resort, you will come across a women cooperative shop.  I loved this shop as everything was priced very reasonably, empowers village women, and some of the stuff are actually nice.  If you go to Ranthambore, I highly recommend you patronize them.

Overall, I was very happy with Amanikhas.  Their service standard is typical Aman (meaning very high) and food was tasty.  The only thing they can improve upon is their souvenir shop.  I wish it is bigger with more stuff in it.  The ones at Amankila and Amanjiwo are huge comparatively speaking.  I particularly like the store at Amankila.  I want to buy everything in there.  Given that Amanikhas is close to Jaipur which is known for their gem stones and jewelry, they should definitely sell lots of necklaces and rings.  Also it would be nice if they sell traditional Indian clothes.  I got some when I stayed at Taj Mahal Palace Hotel in Mumbai.
Posted by Purefecto at 9:00 AM