The place to stay on the island of St Martin 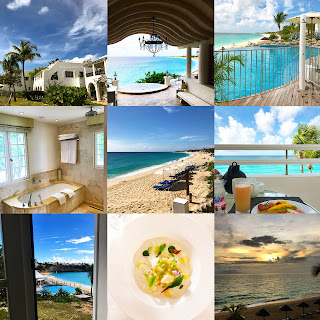 There are many islands to visit in the Caribbeans.  If you do go to St Martin, there is only one hotel you should consider: Belmond La Samanna.  This hotel has a gorgeous beach, delicious food, and good service.

Once you arrive, you are greeted by a gorgeous hallway that frames the aqua blue water.  Staff brings you wet towels and drinks.  Once you check in, they bring a buggy to take you to your room.  If you are in the ocean looking back to the hotel, you will see the check in area actually sits on the highest point of property.  The hotel consist of clusters of villas.  The villas are usually two to a building.  One unit is upstairs and one unit is downstairs.  The upstairs one tend to have a large outdoor area and downstairs one is bigger but the downside is you have someone right on top of you.  Because I stayed in one of the upper unit, I'm not sure about sound insulation if you stay in downstairs unit.  We had someone stayed downstairs and I didn't hear a thing from them.  I would say the best ones to stay are B,C, D, E.  A is consists of several units.  Almost like an apartment building so less private.  All A to E units are literally right in front of the beach so very convenient if you want to go back to use restrooms, take showers, and what nots.

The finishes inside the room is nice.  I thought the bathroom was especially lovely despite the open shower.  I don't particularly care for open showers (seems like the concept is prevalent throughout Caribbeans) as water gets splashed everywhere but luckily bathroom is large enough that I don't feel like I'm drenching the whole bathroom each time I take a shower.

I remember reading some negative comments on Tripadvisor about the food at the restaurants so for several nights I went into town to eat at their local French restaurants.  The lunch I had at the beach restaurant was good.  I had a grilled fish which was cooked to perfection.  I was quite impressed as grilled fish can easily dry out.  The last night at the hotel, I went to their Trellis restaurant with trepidation.  I have to say I was pleasantly surprised.  Having ate at multiple one, two, three Michelin star restaurants several time a year for decades, I would say the quality of food at this restaurant is on par with one Michelin star which is not an easy feat since we are in the middle of nowhere.  I'm a bit confounded by all the complaints.  The food wasn't cheap but it wasn't outrageously priced....I would say same with any other one Michelin star restaurants in San Francisco or New York City.

One of the biggest plus about this particular beach is that you can snorkel locally.  In fact, sometimes you have boats from other establishments that send people to snorkel near the beach.  While I did enjoy snorkeling at La Samanna, it didn't compare to Hanauma Bay in Hawaii or the Maldives.

Because St Martin is close to equator, you can really feel the sun rays beating down onto you.  I have been to other places that are hotter but sun wasn't nearly as strong.  So definitely make sure you wear lots of sunscreen.

On the beach, there is a water sports center where they let you use snorkel gears for free.  If you are looking for motorized activities, those will cost you money.  They also have boats that can take you island hopping.  You can also rent beach cabana from them.  They have a few of them that looks fairly fancy and elaborate.  I'm guessing if you are not a guest of the hotel, this will be the next best thing to have a station on the beach.  Hotel also have several tennis courts which during my stay, I did not see anyone using them.

Overall it was a lovely hotel.  Not the best hotel service I ever had but I would say it's good.  One minor complaint though, I do think they need to hire more beach staff as it takes awhile to get service when you are on the beach as there seems to be only two beach staff servicing the whole beach.
Posted by Purefecto at 9:00 AM