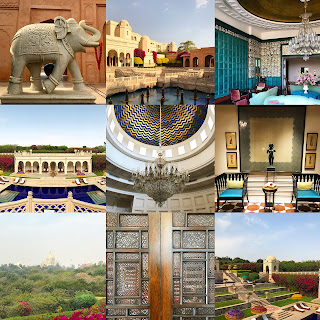 That place is Oberoi Amarvilas.  This is my first time staying with Oberoi resort group and definitely won't be the last.  This hotel is the closest hotel to Taj Mahal among all the hotels in Agra.  In fact, it is so close that you literally can see the Taj Mahal from one's window!  Not only the view was magnificent, but the service was just as fantastic.

We felt the legendary Indian hospitality right as we exit our car.  We arrived around 7PM after enduring over 5 hours of car ride from Amanikhas near Jaipur.   The lobby of the hotel was just stunning.  The central oval dome is painted in zigzag pattern in gold with a massive traditional chandelier hung in the middle.  It was just beautiful.  Once you pass the central dome, there is a gorgeously decorated lounge area on the right hand side or if you want a drink, bar is on the left side.  Everything was in pristine condition.  I was just amazed how well they take care of the property... thinking the place used to be a palace that was converted by Oberoi.  Later I found out the hotel was built in 2000!  LOL.  Well, in any case, the decor give you an impression that this place used to be a palace.

Our room was beautifully decorated.  I love the peacock blue in the bathroom.  I'm sure Kelly Wearstler had been to this hotel a time or two.  Unfortunately they don't lit Taj Mahal at night so one can barely make out Taj Mahal  from Oberoi.  Nonetheless, the garden at Oberoi was lit up like Christmas tree (in a good way).

Following morning Oberoi drove us on a golf cart to Taj Mahal.  Yes, the hotel is that close to the famous Tomb.  Once we soaked in the gigantic white marble building, we head back to the hotel to check out rest of the facility.  I have to say I have never ever seen a manicured garden as pretty as Oberoi Amarvilas'.  It's the most stunning formal garden in a hotel/ resort I have ever seen.  The colors were just incredible and with a backdrop of Taj Mahal to boot!  The pool in the middle of the garden had been painted in azure blue which popped among the most gorgeous patio umbrellas I have ever seen.  I need one of that STAT!

Inside the hotel, there are several boutiques where you can buy stuff to take home.  Luckily most of stuff were of good quality.  Nothing I hate more is buying tacky souvenirs.  One of the shop I like quite a bit is a store that sells paper mache boxes.  All the boxes and pen holders are hand painted.  The work on them are very detailed and definitely don't scream tacky.  Some of them are quite cheap too.  Tiny boxes started around $10.  I know I would charge a lot more if I have to sit down and painted these boxes myself... Not that I can paint as well as these people.  There is also a store that sells stone inlaid objects.  In fact, there are many such stores dot around Agra because Taj Mahal is covered by inlaid stones if you look closely.  The skill trade had been past down since Taj Mahal time.  The way Indian does it is very similar to Italian's.  In Italy the work is call pietra dura.  In fact, I saw some table top stone slabs that could easily be passed off as made in Italy.  Anyway, the store inside Oberoi has some fabulous pieces with price to match.  The price corresponded to number of inlaid pieces and how intricate the pieces were.  The smaller the inlaid work pattern, the more expensive the object is.  Some large boxes can be had for few hundred dollars while a tiny little box with intricate work can cost over a thousand.  The store in Oberoi had objects under a hundred dollar to stuff well into tens of thousands dollars.  So a little bit of something for every budget.

Hotel food was also yummy.  We didn't feel like to do the formal Indian restaurant and opted for the casual one.  The service in the casual one rivals any one Michelin star restaurant in the US; attentive but not obtrusive.  There were plenty of Indian dish as well as European style food.  I had an Italian pasta that was cooked perfectly.  I was surprised and at the same time not surprised.  It's Oberoi after all.

Following morning we checked out early as we had a plane to catch in Delhi.  The hotel manager came by and asked if we need a to go lunch box on our way to the airport.  The only hotel/resort group that I can recall with this kind of service is Aman and Aman is a much smaller operation.  For something as big as Oberoi Amarvilas, I don't know how they are able to personalize this kind of experience.  They come off as they really care about you and want to make sure every single detail is taken care of.  I highly recommend this hotel to anyone trekking to Taj Mahal.  They will treat you like a royalty.