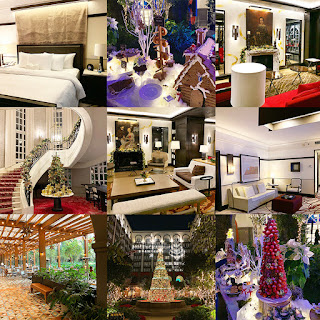 At first glance, hotel lobby is quite lovely.  Clearly it was renovated not too long ago.  All the decoration feels very current yet referencing the past.  The rooms itself is also very nice.  I had a higher floor executive suite facing the beautiful interior courtyard.  I stayed here in December which is Christmas season.  Courtyard had a gigantic Christmas tree with beautiful decorations.  It was very festive looking.  The living room had a comfortable couch and a large desk.  There is also a round table with two seats which is perfect for in room breakfast.  The bathroom was clad in white marble with a separate toilet room.  Hotel provides bottle water daily for brushing teeth which is much appreciated.  It's not safe to drink off the tap water in Mexico City.

Hotel has several restaurants but I only had food at Zanaya which basically is a patio restaurant bordering central garden.  It was very nice to sit there because Mexico City doesn't get very cold in December thus outdoor seating is my preference.  The seafood I ordered was on point.  Everything tasted fresh and cooked perfectly.  I would definitely return to this restaurant next time I come back to Mexico City.

While I was there, Moet & Chandon had a soiree in the courtyard.  You can tell Mexico City society turned up at this party.  The dessert and drinks were free floating.  They had clowns there to entertain kids.  There was also a small chorus singing Christmas songs.  It was really festive and fun.  I didn't know anyone but definitely had a good time.

The service standard is mostly up to par with what one would expect of Four Seasons.  The only mixed up I had was the guide I booked through concierge who came several hours earlier than I requested.  Luckily it's Four Seasons and they were able to find another guide with a car in no time. So all is fine in the end.  Besides this minor snafu, everyone was very friendly.  My flight was going to leave later at night and I had requested to have a late check out.  Unfortunately I had to move because someone else had reserved my room.  But Four Seasons was able to move me to another room and let me stay until I leave for the airport around 4PM.  All of this without extra charge which I greatly appreciate.

Overall this is a polished Four Seasons that I would not hesitate to recommend people to stay here.  In fact, I've already planned to return here myself in the future as Mexico City is just too wonderful to come only once in my lifetime.