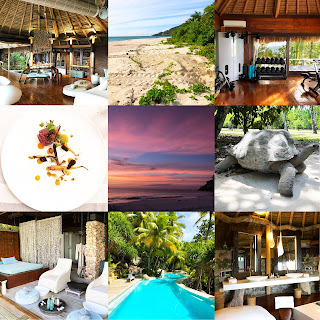 No doubt in top 5 as one the most expensive private island resort on earth is North Island.  But how does it stack up against other cheaper places that are a fraction of its cost?  I will present the facts and you can be the judge.

In order to arrive at North Island, you will have to take a helicopter.  You can possibly take a boat but why would you do that when flying allows you to take the aerial view of the Seychelles islands in?  Taking a boat will be cheaper but at this price range, I'm guessing the only reason one wouldn't take the helicopter is because of the weather not of cost.  The helicopter takes off not far from the international airport.  However, it will only fly if it can make it to North Island and back to hanger before sunset.  So if you arrive at 5PM, you are out of luck unless sunset is at 7PM.  Before booking, definitely take this into consideration as you don't want to pay for a night for a place you can't get to.  Also remember there is only two lane street between airport and helipad.  If you land during the traffic hour (ie. 4PM) at the airport, it may take awhile to get to the helipad even though technically it's not that far of a drive.

Once you arrive at the North Island, you will be greeted by the management team as well as your butler.  Our butler was Kiki who hales from Indonesia.  He's no doubt the best butler we ever had.  If you can, request Kiki as your butler.  You will not regret it.  But more on that later.  Once you arrive at the Island, you will be whisk away to see rest of the resort or directly to your villa whichever you choose to.

We opted for going to the villa.  The villa we stayed in was actually the villa that William and Kate stayed in.  Although my understanding is that all the villa is exactly the same except their "presidential villa" which is couple villas away from the one we stayed in.  The difference it that one is bigger and higher up from the beach.  And because it is at the end, it is the most secluded villa.  With that said, I believe there is only 11 villas total and most of the time not all 10 are occupied so chances of you rubbing shoulders with anyone else is not likely.  This is the villa that George and Amal Clooney stayed at for their honeymoon.  In order to get in and out of the presidential villa, there are some steps one will have to trek.  Although I wouldn't say steps are arduous, I prefer no steps to get in and out of our villa.

The villa is pretty much open air except sleeping room.  There is actually two rooms that are enclosed.  One is what they called library.  This can also double as your kids' room.  In this room there is a sink, a desk, and sofa area which can easily turn into a bed.  This place also act as a movie/ TV room.  Right next to the library there is open air shower and toilet room.  So yes, if you have your kids with you, they have their own bathroom facility.  The living room area is basically a big thatch roof with minimal walls with sofa and tables.  It is where you can lounge and read or take a nap.  This is also where the dining table is at.  Next to the living room area, there is a small hut with a stove, fridge, and pantry.  This is where you butler will heat up food for you, get snacks, and drinks.  Next to living room you can access your bedroom pod.  The bedroom is enclosed complete with a vanity area.  It's quite large and besides the library, is the only place where there is air condition 24/7.  I love air condition spaces so I prefer to lounge inside vs outdoor living room.  The master bathroom is completely open with no walls and a thatched roof.  There are two areas for you to take shower.  one is open air and the other one is under the giant thatched roof.  Both are quite lovely.  The sink countertop is gigantic complete with two large mirrors.  You can tell the faucets are very expensive as well as the mirrors.  In fact, because the design of the whole villa is freeform that everything had to be custom built onsite which makes it very costly.  The biggest complaint I have of the design is that because bathroom is open air, you get bugs coming in.  Every morning when I went to brush my teeth, I would see tons of dead bugs lying on top of the countertop.  Yeah, not my cup of tea to be honest at any price point especially at this nightly rate.  The villa also comes with a large circular dipping pool.  They really should have a proper pool build for each villa.  I get the concept of circular pool for each villa as everything in the villa is designed as free flowing thus circular pool would go better with the design concept.  But the pool is too small to swim in it thus you pretty much can just sit in the pool and that's it.  Sure there is ocean just steps away which is actually my preference anyway but it would be nice to swim in a pool during the time when waves are strong.

This brings in another complaint of mine besides the small pool/ hot tub: the ocean.  I get that there is nothing staff can do about the condition of the ocean.  Sadly when we went, snorkeling wasn't available anywhere off the beach of the island.  The only snorkeling spot is only accessible during November/ December.  I tried to get into the ocean right off my villa.  I would say wave was pretty strong and I was knocked over a few times.  After that, I opted to swim in the hotel's elevated gorgeous public swimming pool.  Although frankly speaking it might as well be a private pool since I never seen anyone up there when I went.  When I'm on a beach vacation, I like to go snorkeling/ swimming in the ocean.  Sadly I feel North Island in July/ August probably isn't suitable for that.  The calmest water is the bay right by the dining area but sadly there is maybe one fish in the entire area.

The shop can definitely use some improvement.  There is very little effort putting into the shop display.  The way they display things reminds me of some shops off the street in Bangkok.  It's very surprising given how beautifully all the facilities on the island are.  Go figure.

Given how far we are from civilization, food is good.  However, not nearly as good as say Cheval Blanc Randheli's Le 1947 which is on an equally remote island.  With that said, CB has a lot more villas and most likely have more resources (LVMH) and manpower compare to North Island.  The chef came from Test Kitchen and I would say the food was quite competent as long as you tell him you want him to cook Test Kitchen-esque type of food.  Otherwise you are going to get the Four Seasons good enough level type of food.

The island has tons of giant tortoise walking everywhere.  They are just a delight to see and pet.  My favorites are Brutus and Patrick which if I remember correctly are around 80 years old.  They also have a lot of turtles that would come up to the beach to lay eggs.  In fact, the night I arrived a turtle came up to the beach in front of my villa to lay eggs and you can clearly see the track from ocean to right outside of my villa then back to ocean.  It was very cool to see this.  Staff would come and mark where the eggs were laid.

North Island has a nice spa.  You can walk up a hill or drive your own buggy up the hill.  It's next to the stunning free form public swimming pool.  The spa is essentially a huge room with massage beds and a enclosed area where you can take shower, etc.  The interior decor is very similar to the villa but the view of the ocean is better since you are elevated.

North Island has two bars.  One is next to the main dining area.  The other one is on the opposite end of the island.  It's a cute little bar.  Sadly the larger one that was there before got burned down sometimes last year so the one I saw was a temporary one.  Still, I think they did a pretty good job with the temporary bar.  The best part of this side of the beach is the sunset.  The villas are all on the sunrise part of the island.  So in order to see the sunset, you have to drive your buggy and come to the opposite side of the island to see sunset.  The sunset here is spectacular.  The color of the sunset is perhaps the best I have ever seen and I've been to pretty much all the Polynesian islands in the Pacific.  I will let the #nofilter photo do the talking.

The very best part of the North Island is undoubtedly Kiki.  He's my butler and he's always around to take care of every last detail.  For example he knows I am going to the private beach one afternoon, so he went and did some scouting to make sure it is accessible couple hours before hand (sometimes it's not due to tide).  Because it wasn't accessible from the normal route, one has to do some climbing and he personally recorded the route using his cellphone and showed it to me to see if I'm ok with trekking to this private beach.  Another example would be I wanted to gift a stuff animal to another couple's kid I met on the island.  Unfortunately the boutique on North Island did not sell such thing.  One mention to the management, a stuff turtle magically appeared the very next day.  It was flown in via helicopter.  The only charge on my bill was the stuff animal.  Now if that's not above and beyond personal service, I don't know what is.  In a nutshell, this resort has the highest service standard I have ever received from any resort hands down.

I think this is a perfect place for someone who wants anonymity especially people from Europe given it's really not that far.  I didn't see any movie stars or politicians here but I did meet a guy who was the CFO of a well known Fortune 500 company.  I'm sure it's better to vacation on a very private island out of probing eyes of public for these type of people.  With most vacationers though, I'm not sure if this kind of extreme privacy is needed.

Sadly, I read that North Island is now being managed by Marriott.  Enough said.  I feel bad for the staff there.  I'm sure in no time Marriott will think of ways to maximize the return by building many more structures on the island and getting loads more vacationers onto this paradise.  Glad I get to experience it before it is ruined.  Needless to say I will not return to this place now that it is being managed by Marriott.  Just about everyone I spoke to whom has been here was aghast that Marriott is taking over.
Posted by Purefecto at 4:03 PM