Where to stay in Kathmandu 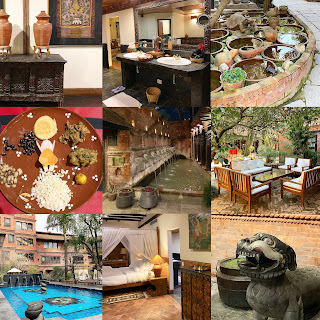 Since there are no Amans and Four Seasons, or even St Regis and Park Hyatts, where does one stay in Kathmandu?  Frankly speaking there aren't many choices to be had.  With some trepidation, I ended up staying at Dwarika's hotel.  It was recommend to me by a friend of mine who had stayed there before.

Because there is barely any paved road in Kathmandu with one street light that doesn't work, getting around Kathmandu is very chaotic not to mention dusty.  Thus location of your hotel is important as it would mean getting to the attraction quickly or sit in a dusty traffic hours on end.  While I don't know the traffic pattern of Kathmandu, it seems to me Dwarika, more or less, sits right at the juncture of major tourist sites.  I find each time we go out, we would usually get stuck in traffic initially but then quickly reach our destination after passing the main thoroughfare.  When we hit few destinations in one day, we would ended up passing by the hotel multiple times.  This tells me Dwarika is actually centrally located to all these tourist sites from my multi-day experience.

The first impression of the hotel is it's quite lovely.  Apparently the original owner, Dwarika Das Shrestha, picked up a bunch of architectural carvings in 1950s as people were sawing them off for firewood.  He decided to collect these ancient carvings and constructed a hotel around these architectural elements as people discard them.  Thus the hotel architecturally is a mixture of various styles which can look a bit messy but charming at the same time.

Every night around sunset, the hotel has a dancer who would do traditional dance in central courtyard.  I really enjoyed seeing that as it not only reenforced the local culture upon its guests, but also this is a nice way to calm its guests from the hectic Kathmandu right outside the entrance.

I stayed in the Heritage Executive Suite which faces the beautiful interior courtyard.  The room obviously can't be compared to Amans or Four Seasons.  It's very rustic.  But everything in the room feels very authentic and not put on.  Everything you need is there; the bed was comfortable; the room is large; the bathroom is almost the same size as the bedroom.  The only complaint I have is I wish bathroom is brighter.  It felt a bit dark especially in the shower area.  I typically like to hang up everything when I check into a hotel room.  Unfortunately the existing clothes rod couldn't take on the weight and fell.  It was quite funny actually.  I ended up requesting clothing racks as I'm sure those will hold weight of several heavy jackets and pants.

There are several restaurants available within the Dwarika hotel/ compound.  The Krishnarpan restaurant is a must for someone who's curious about Nepalese food.  From my understanding is that Krishnarpan is one of the best Nepalese restaurant in the city.  In addition, there is a Japanese restaurant called Mako's.  It felt like a neighborhood Japanese restaurant here in the SF Bay Area.  I would say the food is fine. Furthermore, there is a restaurant called Toran.  It basically has some Nepalese food plus other western cuisines.  Among these three restaurants, my favorite is Mako's as it reminded me of typical Japanese food I have at home.  I didn't get a chance to try the Fusion Bar or Kaiser Cafe.

I didn't use the pool as it was end of January in Kathmandu.  While I didn't test the water, I assume it's not heated.  I also didn't try the spa.  Although if the spa here is similar to the one at Dwarika's Resort, I would  recommend it.  There is a conglomerate of shops towards the back of the compound.  I think it's probably rented out by the hotel to individual shop owners.  I would say lots of interesting stuff and most look like they have been curated and not junky stuff you find around tourist attraction sites.

One thing I was not happy about was I had asked the concierge for a taxi to take me to a monastery outside of Kathmandu. The name of the monastery is quite long and I had assumed there is only one monastery with such name.  Unbeknown to me, there is two monastery with same name.  The concierge failed to tell me and luck would have it I was sent to east side of the town instead of west side.  Because I had an appointment with a monk, I ended up being two plus hours late.  Later on I found out the concierge knew there were more than one monastery with the same name.  I'm not sure why he didn't notify me before I hop into the taxi the hotel found for me.  Later the owner (Dwarika Das Shrestha's daughter) came to apologize to me and paid for my dinner at Mako's.  I obviously would much rather be at the monastery at the appointed time than a free meal but I appreciate the owner took responsibility for her staff's failing.

Even with the concierge mixed up, I would still recommend this hotel.  Don't expect this place to be luxurious (as in Aman or Four Seasons' way) because it is not.  However, the service standard is as high as any Amans I've been to and I would gladly return to this hotel next time I come back to Kathmandu.
Posted by Purefecto at 11:00 AM