The restaurant at Meadowood 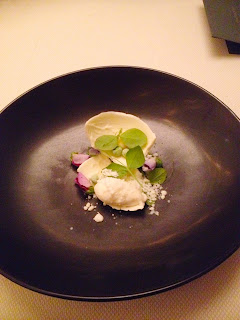 Pretty much anyone who likes fine dining have heard of French Laundry Restaurant but there is a secrete gem in the wine country that's less famous than French Laundry but equally as good.  I'm talking about The restaurant at Meadowood.

Like French Laundry, it's the only three Michelin Star restaurant on the US West Coast.  Chef Christopher Kostow did an amazing job to lift Meadowood up to obtain that coveted third star.  Is it better than French Laundry, no it isn't.  But it's not worse than either.  I would put them on par.  The best part is both restaurants had different take on their food.   I would say French Laundry is the ultimate classic French cuisine on the West Coast.  Meadowood, on the other hand, is the ultimate nouveau cuisine on the West Coast.

Chef Kostow somehow takes ingredients that I don't think would go well together and made them sing.  Most of the ingredients are something I'm familiar with but would never had paired them together.... and that's what's ingenious about Chef Kostow.  The atmosphere is formal and yet relaxed.  It feels like a place I can come once a month and be fine with whereas French Laundry feels more like a place where I go once a year.  Meadowood Restaurant just had a nice ease about it.  The service was perfect so was the food.  I can't think of anything to complaint.  It was just pure perfection.  So next time you are on your way to Napa, put Meadowood restaurant on your to do list.  Your taste buds will thank you.
Posted by Purefecto at 9:00 AM