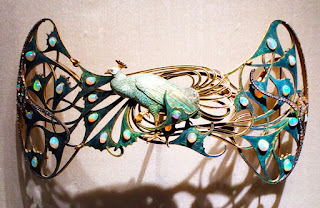 Everyone has heard of small museums like Isabella Stewart Gardner museum in Boston or Frick Collection in NYC.  But not many people have heard of Calouste Gulbenkian Museum in the US.  If you ever go to Lisbon, it's a must stop.  This museum is basically a personal collection for Calouste.  He was born in Constantinople but live mostly in United Kingdom and France.  Towards the end of his life, he moved to Lisbon.  He made his money in oil and was a major shareholder of Royal Dutch/Shall company.

Another highlight may be the large jewelry collection by Rene Lalique.  Most people when they hear Lalique they think of crystal vases.  But during Art Nouveau period, Rene Lalique was arguably the best jeweler during that time.  Two of the best examples of Rene Lalique jewelry is actually housed at this museum: Dragonfly Broach and Serpents Pectoral.  The pieces are actually quite large in person and they are absolutely exquisitely made.  Like all artwork, you have to see them in person to appreciate them; photos do not do them justice.