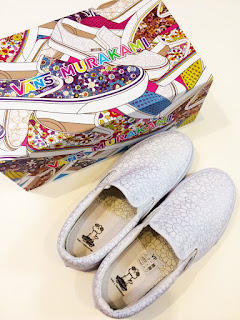 This past Saturday had been one of the busiest day for sneaker heads across US.  Apparently two collaborations decided to drop on the same date: Yeezy for Adidas and Takashi Murakami for Vans.  Naturally both were sold out instantly online and in stores.  I thought one can only get Murakami for Vans in stores so I had planned out which ones I would go to first.  But later I found out that they were also being sold online from various outlets!  Wish I had known!!!

I found there were only three stores in SF bay area that had them.  And only the Berkeley store carried the skateboard decks.  I made the decision to go to the SF ones instead because the Berkeley one did not carry silver flower on white vans which is the one I wanted the most.  Although I would be very happy to settle for a pair of blue flower or multi-color flower.

I got to the store about 15 minutes before opening.  There were about 15 people in front of me so I was a bit nervous... thinking they may ran out of shoes.  Apparently some of those people were there to pick up their Yeezy shoes and not Murakami for Vans.  When I got into the store, they were sold out all the flower t-shirts (which I'm not sure I wanted one anyway) and self portrait t-shirt (only S left).    I was pretty sure I wasn't going to fit into the S so I let it pass.  They also sold out of multi-color flower vans.  I was able to get a pair of silver on white flower shoes in my size (woohoo) and a pair of blue flower shoes a half size bigger than I would normally wear (hurray).  Apparently that was the last pair of blue flower vans they have left.

As I was leaving, I saw about another 10 people waiting in line.  I hope they get what they were looking for.  I did ended up trekking to Berkeley to see if they had anything left.  They were wiped clean and had only a pair of yellow skull vans (but a size too small for me) and a pair of blue skull vans (a size and a half too small for me).  I did see them put those two pair up the following day online which of course they were gone in a nano second.

I checked on Ebay and apparently that's where all the shoes went.  Although honestly they must have released very few pairs at each store as I checked for my size, there really isn't that many available.  The skateboard decks turned out to be the hottest item on Ebay as I expected they would be.  Most of them are selling for around $600 a deck at the low end (retailed for $80 each) and the most sought after multi-color flower ones are trending around $1000!
Posted by Purefecto at 11:34 AM