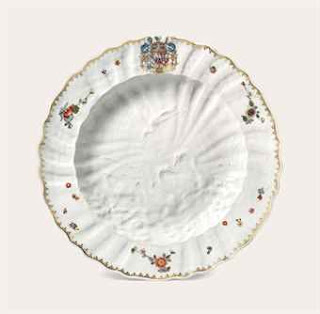 Meissen has been around since 1708.  It is the first European manufacturer to figure out how to produce true porcelain.  Before the discovery, Europeans did produced white-colored porcelain.  However, it was soft by nature (hence the name soft-paste porcelain).

It's hard to believe, but porcelain in early 18th century is literally worth its weight in gold.  During this time, there were a lot of trials and errors.  Thus production was very limited and only upper classes can afford to have them.  Hence during early to middle 18th century, porcelain were given as diplomatic gifts among kings and queens.

The most well known pattern by Meissen is called the swan service (schwanenservice).  This service was ordered by and made for manufacture's director Count Heinrich von Bruhl.  Swan service was so large that it took 7 years to make and the result was more than a thousand pieces ranging from center pieces to plates and cups.  The molds still exist today and this pattern is still being actively produce by Meissen.  Most of the original pieces from swan service are in museums but occasionally one can find them at auction houses such as Christie's or Sotheby's.

Another interesting offshoot of Meissen porcelain is called Hausmalerei which means home painting. During 18th century, entrepreneurial artists would buy blank porcelain, paint them, and sell them at marked up prices.  Thus they are partially original and yet partially not.  Today, they are actively sought out by collectors who specialize in collecting Meissen Hausmalerei-ware.
Posted by Purefecto at 9:00 AM