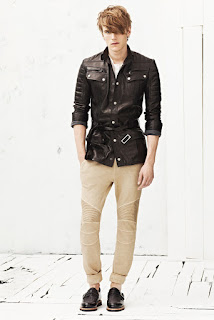 Well, it's been about year and half since Decarnin was succeeded by Olivier Rousteing.  It must be a difficult balancing act for Olivier to maintain the biker look while trying to put his own stamp on it.  I think 2012 was a year where he more or less did what Decarnin did.  But for his SS 2013 collection for men, you can see he's emerging slowly from the shadow of Decarnin.  For one, boots are gone from almost all the photographs that were disseminated by their PR team!!  Secondly he has embraced the flood pants look.  Just about every single pants/jeans that were shown were folded up to the flood pants length.  While I don't think the length works for biker jeans, but he's definitely putting his stamp on the silhouette.  Lastly, it's not all about military and biker looks anymore.  He has introduced safari vocabulary into his work.  I think it's a good thing that he's changing things up as you can only go so far when the only thing you do is repeating the same theme over and over again.

I love the leather shirt jacket in this picture.  I think it has a good balance between biker and safari influence.  But I do have a problem with the jeans that went with this look.  It felt too busy.  There is already enough things goes on with the top that all is needed is just a plain khaki pants or jeans.  I also don't think the shoes work with this particular look but bravo for changing it up.  I look forward to see his FW 2013 collection!
Posted by Purefecto at 9:00 AM