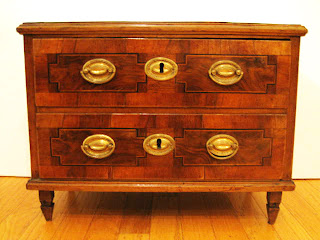 Ever wonder how a salesman sell furniture in 18th & 19th century?  Unlike today where furniture shops are dotted everywhere including internet, back in 18th & 19th century, they weren't as prevalent (or in the case of internet, none existent).  People often live far apart.  A small town wouldn't necessarily have a furniture maker and traveling is often a choir since car wasn't available and train wasn't commercialized until 1820s and became popular until 1830s.

Well, furniture salesman back then traveled from town to town to sell furniture.  They not only brought drawings, but sometimes they also bring miniature samples so client can visualize what the piece looks like when it's delivered.  These salesman sample are extremely collectible these days.  Depending on the shape of the furniture, they may be perfect for holding nicknacks on a bedside table or as a sculptural piece on top of a console table.  They can usually be found at various auction houses such as Christie's/ Sotheby's or antique stores.
Posted by Purefecto at 9:00 AM