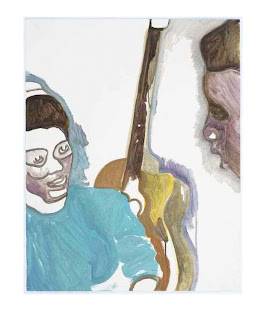 I seem to be saying this quite a bit lately; it is often not easy to buy a print by a famous artist cheaply.  Getting one on sale is unheard of; Peter Doig's print of Two Faces and a Guitar is one such opportunity.

Peter is highly influenced by Edvard Munch, Claude Monet, Klimt, and Friedrich.  His works are known to capture moments of tranquility with dream-state element.  Doig's usage of unexpected angles and color combinations contribute to the uniqueness of his art.

As you can see this particular print has some aspects of Munch in it in my opinion.  It has typical Doig-ness in it; from the odd angle of the subjects to dreamlike quality, it makes a casual observer do a double take to try to figure out what's going on here.  This print, in edition of 500, was commissioned by Tate Modern museum and can be purchase on their website.  Peter's auction record is $11.3 million set at Sotheby's in 2007.  His paintings have routinely auctioned for seven figures since.