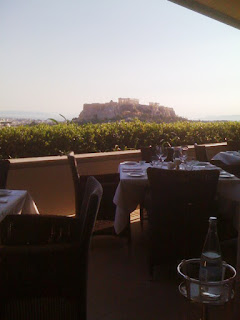 If you are going to Athens (now that the euro zone agreed to provide nearly 50 billion euros in long-delayed aid to Athens), there is only one place I would recommend you to stay: Hotel Grande Bretagne.  The hotel is centrally located in the middle of Athens.  It is right on the Syntagma Square  (where you see the daily Greek protestors protesting against their government) next to the infamous Parliament building.  It was built in 1842 as a house!  But since then, it went through several incarnations and now it is part of the Starwood hotels & resort.

The ambiance of the hotel is actually quite interesting.  Once you arrive, you have to walk a few steps up into the hotel.  The odd thing about it is that there are couple homeless dogs (or what appears to be homeless dogs) lounging on the steps too.  Kinda funny and charming actually.  The inside is grand as one can expect.  It's very old school looking like the old Plaza Hotel in NYC or Fairmont Hotel in SF.  The rooms are very nicely appointed; a mixture of Louis XV, XVI, Empire style furnishing.  The bathrooms are quite large and the large shower stall is lined with various colored marbles... very sumptuous I would say.  If you are lucky, you may get one of the room facing the Parliament building and Parthenon.  Well, I guess not exactly lucky.  If you are willing to pay for the view, I'm sure they will be more than happy to accommodate that request!  LOL.

The roof top restaurant is a must.  It's a great way to take in the magnificent view of Athens.  The food is good as well.  I had a fish dish and it was done very nicely.  You can tell it's freshly caught from Aegean Sea.  Overall it's a very nice stay and I would highly recommend foreign visitors to Athens to stay here.
Posted by Purefecto at 9:00 AM