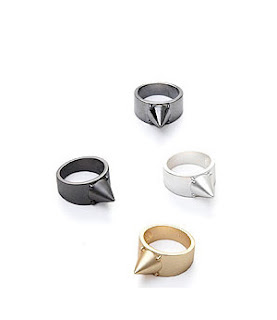 I have to admit that I never heard of Eddie Borgo before the Neiman Marcus + Target collaboration.  But I do have an excuse... I'm not a big jewelry person.  I have few rings here and there but frankly they just sit in my cufflink box; I can use my fingers to count how many times I wear jewelry in this past year.  And truth be told that I wasn't too keen on the Eddie Borgo pieces when I first saw them during the NM+T reveal online.  I thought it was outrageous for someone who is relatively unknown to masses to be included in this collaboration let alone charging $50 for a metal box! Surely no one would pay that kind of money for an upstart!  When I saw the box in person, I became that person who paid $50!  I thought the box was well executed.  The detail was very crisp and it just felt like the box translated quite well from his jewelry collection.  I was intrigued.  When I got home,  I looked him up.

Well, turned out that he is relatively new to the fashion scene: 2008.  Basically he majored in art history but dabbled in clothing design.  In his own words, he wasn't very good at it.  But he was good at the accessories part.  Between 2008-2009, he did a few custom pieces for various runway shows.  It is at this time, Philip Lim asked him to do a collection for his fashion show.  After Philip paid him, he produced a 10 piece collection and sold them at Barney's New York, Joyce in Hong Kong, Collette in Paris and Liberty of London.  Rest is history.  Now he has about 90 retail outlets that carry his jewelry.

I really like his cone ring.  It feels like it is a classic for his design; it embodies streamlined rock and roll aesthetics.  I may have to pick one up soon!