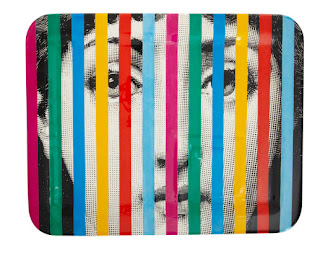 I got my holiday catalog from Barney's New York today and I browsed quickly through everything.  Of course there were tons and tons of stuff that I liked but one thing that definitely caught my eyes was the Fornasetti face and stripe tray.  It's almost kinda Paul Smith meets Fornasetti!  The rainbow color stripes looks super festive during the holidays and of course the signature Fornasetti face (of Lina Cavalieri, who's an Italian operatic soprano) behind the stripes makes you wonder why she's hiding behind the stripes?

Piero Fornasetti was born in 1913 and died in 1988.  He's an interior decorator, engraver, painter, and a sculptor.  He's known for the motif of Lina Cavalieri's face.  He moved to Switzerland during World War II and created tens of thousands of items featuring Lina's face, sun, and time.  He created items from umbrella stands, to chest of drawers.  There is actually a secondary market for vintage Fornasetti.  And of course like everything that is fabulous, there is also forge Fornasetti too so collectors need to be aware and always buy from trust worthy sources.  And one of those trust worthy sources for new genuine Fornasetti is Barney's New York!
Posted by Purefecto at 9:00 AM