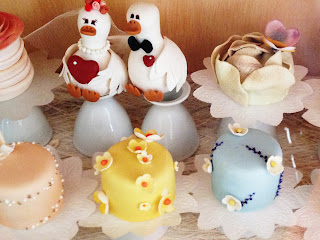 I'm sad to say that Jin Patisserie will be moving in January.  The owner, Kristy, still doesn't know where she's moving to.  Landlord of her current place has jacked up the rent so she had no choice but to move.  So if you are in Venice, CA, do go to her lovely retail outlet and have a cup of tea and dessert in the garden.  It may be awhile before Kristy finds another store front.

Kristy Choo, a former flight attendant, received her culinary education at California Culinary academy in San Francisco.  In 2003, this Singaporean transplant found her home in Southern California and opened her shop on Abbot Kinney Boulevard.  You not only be able to buy chocolates and macaroons at her patisserie, but you can also get sandwiches and teas too.  It's a perfect combination for a place to repose after leisurely shopping on Abbot Kinney.

There are too many favorites to mention but I have to say her chocolate cake is absolutely divine; smokey and smooth.  She also specializes in miniature cakes.  They are to die for.... just amazingly cute!!!  So you have about two more months before she closes.  Hurry and go before this lovely patisserie closes its doors. You can also order her stuff online.
Posted by Purefecto at 9:00 AM