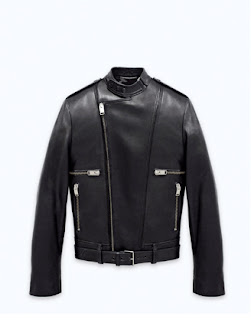 Well, the Yves part got dropped and Paris was added.  That's how Hedi Slimane likes it.  Some people called it heresy, some called it daring, and many wondered what's that about?  However you put it, Hedi is in charge and he intends to made sure everyone in the fashion industry knows about it.

Karl Lagerfeld lost about 90 pounds so he would fit into one of Slimanes esteemed Dior Homme suit.  When someone like Karl, who's taste level is obviously quite high, deemed Hedi's suits are coveted enough for him to slim down that much, you know Slimanes is up to something great.

Spring/Summer 2013 is Slimane's first collection for YSL (minus the Y) since his return to the esteemed house.  He was actually the men's creative director for YSL from 1996-2001 but left to head Dior Homme.  He stayed until 2007 when he decided to leave on his own accord.  He moved to Los Angeles in 2007 and curated art shows and exhibited his own photography (at MOCA).  In 2012, he was lured back to YSL because they promised him total control of the brand which he decided to drop the Y in YSL and move the creative studio from Paris to Los Angeles.

I have been a fan of his Dior Homme clothes forever.  I'm cannot wait to try on SLP pieces!  I'm sooooo excited!!!!