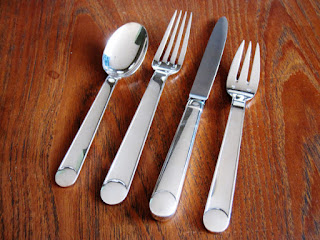 This is one of my favorite silverware design.  This particular set was designed specially for the first-class tables of the Normandie cruise ship in 1934 by Jean Puiforcat.  I just love the clean line of these flatware.  Fortunately these are still available for purchase at Bergdorf Goodman and Hermes.

SS Normandie, named after French province Normandie, was an ocean liner built by Compagnie Genereale Transatlantique (CGT) in 1935.  She was the largest and fastest passenger ship at that time.  Because of the speed, lavish interiors, and great design, many considered it as the greatest of ocean liners.  It carried many luminaries such as Marlene Dietrich, Carry Grant, Salvador Dali, Josephine Baker, and Ernest Hemingway to name a few , during its years of service.  During World World II, she was seized by US authorities at New York and converted into a troopship.  Unfortunately during conversion, she caught fire and sank to the bottom of the Hudson River.

The interior of SS Normandie is by far the most lavish interior ever done for an ocean liner.  Almost every single top Art Deco designers had their hands on Normandie; Rene Lalique did the lighting, Jean Puiforcat did the silverware,  églomisé mural panels were by Jean Dupas, and one of a kind veneer baby grand piano designed by Louis Sue (of Sue et Mare).  The list goes on and on.  Luckily before SS Normandie went down in New York harbor, many items were salvaged.  They are very collectible these days; one can buy a poster of SS Normandie on Ebay or bid on one of the églomisé mural panels were by Jean Dupas at Christie's auction house.