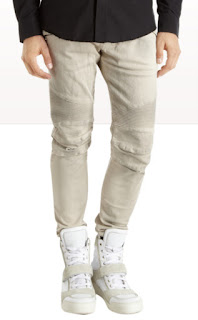 Because I know you are dying to find out where Justin Bieber got his jeans in Beauty and A Beat video!  LOL.  Well, you can buy it at Barney's New York!  I love Balmain jeans because they are very rock and roll-ish;  Balmain uses all kind of hand treatments on its jeans which are not found with other brands;  there is definitely a certain look to them but nothing too loud or garish.

House of Balmain has been around for quite a long time and seen its up and downs through the years.  It was started by Pierre Balmain in 1945.  He actually studied architecture in school although his mother and sister did have a fashion boutique.  He was nominated for a Tony award for Best  Costume Design for musical New Happy Year.  His clothes were worn by celebrities such as Brigitte Bardot, Sophia Loren, Vivien Leigh, Josephine Baker, etc..

After he died in 1982, the house was led by his "right hand" Erik Mortensen.  Oscar de la Renta led the house between 1993-2002.  Christophe Decarnin took the reign between 2005-2011.  Instead of using Pierre Balmain, his clothes were simply labeled Balmain.  With French Vogue's fashion editors, assistant editors wearing his clothes about town, Balmain exploded in 2008.  His clothes becomes essentially the best party clothes about town.  That is if you can afford them.  Dresses are basically long t-shirt lengths.  It took a few years for American buyers to catch up because Balmain was just exceedingly expensive.  Today, Balmain is popular with male celebrities such as Justin Bieber, Kayne West,  Zac Efron, Reggie Bush, etc..  Needless to say, tons of female celebrities wear Balmain as well: Kristen Stewart, Beyonce, Jennifer Aniston, Rihanna to name a few.

In 2011, Olivier Rousteing took over as the creative design director because Christophe Decarnin was rumored to suffer a nervous breakdown.
Posted by Purefecto at 9:00 AM