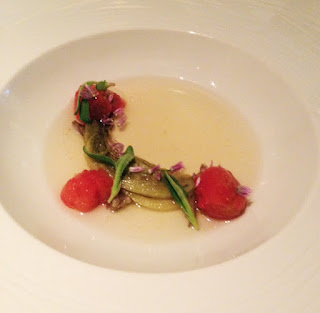 Douglas Keane, the chef and owner, won numerous awards for this restaurants: the James Beard Award for Pacific region in 2009, top chef by Food and Wine magazine in 2006, etc...  Cyrus also has coveted two Michelin Stars.  However, I'm sad to say that despite all the raving reviews, Cyrus Restaurant is closing at the end of this month.  It'll be the end of luxury dinning in Healdsburg, CA.  The reason for closure is that the restaurant is actually renting its space from Les Mars, a Relais & Chateaux hotel.  Les Mars need Cyrus to provide breakfast and lunch for hotel guests but Cyrus is only open for dinner.  So one is staying at a luxury boutique hotel with stale croissant in the morning....  As you can imagine, there are so many competitions for hotel dollars especially in wine country, Les Mars cannot afford to operate without a kitchen and charge $500-$1000/ night price tag.  So something had to give.  In the end, Les Mars prevailed.  As of today, Douglas Keane has not announced his future plan after closure of Cyrus.

But enough of the gossip, let's talk about food.  Given the number of courses that Cyrus serves for its tasting menu, the price is actually very reasonable especially compare to French Laundry, a three star Michelin restaurant.  One of my favorite dish is the deconstructed BLT, Cyrus style.  What chef Keane did was he braised romaine lettuce leaves and immersed them in a dashi bacon broth with confit of tomato.  It was complex and yummy; the broth was earthy and tomato was bright.... a perfect balance.  I really enjoy the creativity that goes into these kind of dishes.  The only disparaging thing I have to say about the restaurant is the decor.  It felt like a space that desperately wants to look like it was expensively done but fell very short in the end... I would almost use the word tacky.  I hope chef Keane hires the designer who did Redd restaurant next time; the space is simple, elegant and classy.  Food at Redd is another story though.....
Posted by Purefecto at 10:55 AM