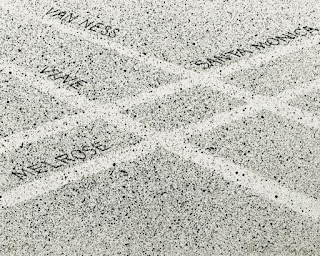 When was the last time you see all those streets cross each other?  Obviously these main artery streets of SF and LA never cross.  But what if they did?  What will you find at those corners?

This is a print by Ed Ruscha, one of the foremost American artists alive today.  Born in 1937 in Omaha, Nebraska, Ed moved to Los Angeles in 1956 and lived there ever since.  His subject includes gas stations, logos, signs, freeways, etc..  He is probably most well known for his paintings of Standard gas station.

I like this particular print because I am quite familiar with San Francisco and Los Angeles having lived in one and currently residing in the other.  There has always been somewhat of an unspoken rivalry.  People in Los Angeles think San Franciscans are just pot smoking left wing hippies while people in San Francisco thinks Los Angelenos are a bunch of superficial glamour chasing starving actors and actresses.  But what happens if you jumble both cities together?  What would be at the corner of Van Ness and Melrose?  That's for the viewers to imagine and decide.  This print is available at the venerable Crown Point Press.
Posted by Purefecto at 6:11 PM