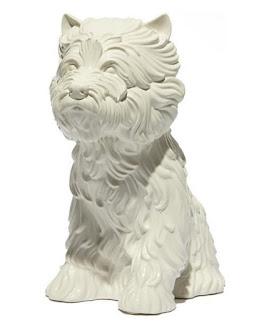 I remember the first time I saw Jeff Koons' Puppy sculpture.  I heard of that name before but I was not at all familiar with his art.  I just thought the sculpture was oddly kitschy and somehow I really wanted it.  It was priced at $1600 if I remember correctly.  That was a lot of money for me then (and still no pocket change now) so I ended up not buying.  However, every time I went into that shop on Melrose Avenue, I would struggle with the decision: to buy, or not to buy?  I then moved away and the shop has since defunct.  I always wonder where that piece of sculpture went?

Jeff Koons was born in 1955 in York, Pennsylvania.  He studied at School of the Art Institute of Chicago and Maryland Institute College of Art.  In 1977, he moved to NYC.  By 1980, he got a license to sell mutual funds and stocks and became a commodities broker at Smith Barney!  He did not abandon his love of art though.  He was making them on the side and by mid 1980s, he rose to prominence.

In 1992, he was commissioned by three art dealers to create a sculpture for Arolsen Castle, Germany.  The result was a 43' tall topiary of a puppy.  In 1995, Puppy was moved to Museum of Contemporary Art in Sydney Harbor.  In 1997, the sculpture was purchased by Guggenheim Museum in Bilbao and placed next to the famed Frank Gehry designed museum.  Another puppy sculpture was created in 1993 for Peter Brant and Stephanie Seymour's Connecticut estate.

In 1998, Jeff Koons released 3000 editions of miniature version of the sculpture puppy which was the edition I wanted but did not buy.  In 2008, Gagosian Gallery re-released another 3000 edition of the puppy sculpture... this time at a princely sum of $7500.  Can I kick myself now???  One can purchase the original edition at Phillips de Pury auction house.