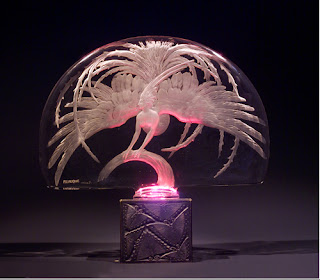 This fire bird lamp is made by Rene Lalique.  The glass plaque sits on a bronze base with butterflies.  It is one of my favorite Rene Lalique crystal.  This lamp was probably made between 1920s-30s.  It's really more like a sculpture than say lamp since the amount of light radiates from this lamp is too weak to use as anything but decorative.  Colored glass is placed on the bottom of the plaque so the lighting effect can be changed depending on the owner.  Corning museum of glass has one of these lamps.  They can also be purchased at various auction houses such as Sotheby's or Christie's.

Rene Lalique was born in 1860 and died in 1945.  He actually started off making art nouveau jewelry during his first career.  He was very well known for them at the turn of 1900s.  Unlike his predecessors, he used semi precious stones and glass to make his jewelry which was very avant garde in its day since pretty much the only jewelry that was considered high end then were the ones dripping with diamond and pearls.  Around 1910 he was commissioned to develop commercial perfume bottles which lead him to produce crystal vases that Lalique is known for today.  There are two different types of collectors that collects Lalique crystal.  The more "serious ones" collect pre 1945 Lalique crystals.  Those ones generally has R. Lalique stamped, scripted, or molded on the bottom of the vase.  Post 1945 Lalique crystals are less collectible although there are still plenty of people collect those.  They are just stamped or scripted Lalique on the bottom.  Pre 1945 Lalique pieces also has less lead in the crystal hence the weight and look of the pieces are different than the ones made post 1945.  Many pieces that Rene Lalique designed are still in production today.  Some unscrupulous seller may decide to add a R in front of Lalique and try to pass it off as a pre 1945 piece.  Collector of pre 1945 Lalique crystals should always be very careful because large amount of money could be at stake.  Best thing to do is to purchase them through reputable dealers such as David Weinstein and Paul Stamati.