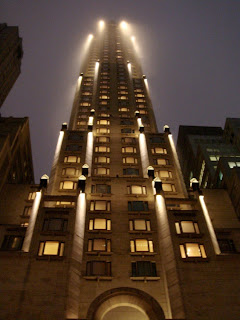 Where does one stays when one travels to Manhattan?  I would highly recommend Four Seasons hotel.  Yes, I know the building and interior of the rooms are somewhat dated.  BUT you can never beat Four Season's level of service.  You can equal it, but not beat it.

I.M. Pei and Frank Williams did the design of the hotel together in 1989.  The hotel was completed in 1993.  As anyone in architecture can tell you, there is fashion in the way a building look too.  And however many ways Four Seasons tries to dress the interior of the building up, the exterior of the building looks 1990s.  It just looks dated.  There is no way around that.  The sleeping quarter inside of the hotel isn't any less dated than the building itself.  Blond wood.  Need I say more?  It's very 1990s.  Another thing about the room is that it only has ONE sink.  I guess they only like businessmen staying there....  The counter is definitely large enough to hold TWO sinks btw.

So after all the complaints, I would still recommend people to stay there???  In a word, yes!  One, you can't beat the location.  It's only a block away from 57th Street and 5th Avenue... or more precisely a block away from Bergdorf Goodman.  Need I say more?  If you are a shopaholic, Four Seasons is the hotel to stay at!  Two, what differentiate a good hotel and a great hotel is service.  You want a pot of hot coffee in your room?  Right away!  But would that coffee pot keep the coffee hot after a few cups?  You bet.  Do they take a picture of your bathroom stuff that you leave out on the counter?  Yes!  How else would they clean your bathroom counter and be able to put everything back EXACTLY the way you arranged them?  It's the attention to this kind of detail that sets the good hotels and great hotels apart.  Third, the rooms are large compare to other hotels in the area.  When square footage is at a premium, especially in NYC, one can certainly appreciate a spacious hotel room that lets you layout and lounge leisurely without feeling claustrophobic.  Lastly, if you like celebrity sightings, you have come to the right place.  While Four Seasons hotel would never divulge who stayed at the hotel, let's just say sightings have included Jay-Z, Sacha Baron Cohen, and Lebron James, to name a few.
Posted by Purefecto at 9:00 AM