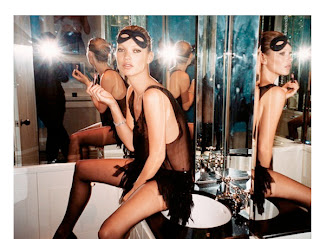 Who does Anna Wintour ask when she needs a passport photo?  Mario Testino of course!  Who else?  The prolific photographer had done photo shoots from supermodel Gisele to Diana, princess of Wales.  A retrospective of his works opened on October 21, 2012 at Museum of Fine Arts Boston.

I know you are dying to own a piece of him!   LOL.   My dear readers, let me give you a little "in" on how to get a discounted Mario Testino limited edition signed photograph.  Go to Counter Editions, choose a Mario Testino photo that you like and use price code TESTINO12 at the checkout to get a discount of 250 pounds!  These limited edition prints are sold out at MFA so the only way to get them is order them from Counter Editions.  The most collectible print from this bunch is Kate Moss in my opinion.  After that I would say Sienna Miller.  Of course only time will tell which one of the four is the most valuable ones!

For those of you who are not familiar with Mr. Testino, Mario was born in Lima in a middle class family with five other siblings.  He studied economics at Universidad del Pacifico.  In 1976, he moved to London to study photography.  Mario started to emerge as one of the most important fashion photographer by 1990s.  He was known for Vogue cover shots.  It certainly helped that Anna Wintour, who became the editor of Vogue in 1988, has been a good friend of his for the past 25 years.  By 1995, he was doing a Versace campaign of Madonna.  Recently, he took the official engagement portraits of William and Kate Middleton.