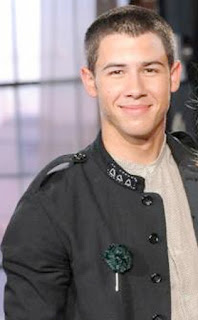 Did you watch X Factor last week or the week before?  Then you would have seen Nick Jonas.  He was one of the guest judges.  On his jacket, he wore a Lanvin tiepin.

Tiepins pretty much went away as we dress down more and more today.  They were originally worn by wealthy English gentlemen in the early 19th century to keep their tie down.  By late 19th century, ladies start to wear them too with their sporting outfits.  Until 5,6 years ago, you would be hard pressed to see any 20-35 year old men wearing stickpins.  Alas, perhaps it was Chuck Bass of Gossip Girl that brought smoking jackets and stickpins back?  We see them a lot more on fashionable guys these days.

I just love stickpins because putting one on a jacket give the whole ensemble an extra sophistication.  It's kinda like when you have a great looking sofa, you put your favorite pillows on top to dress it up.  Of course you don't need one from Lanvin to give you that extra something something (although I do have a soft spot for them).  Pick one up from a yard sale or just go on Ebay.  They have tons of listings for couple dollars each.  It's a fantastic way to stand out from the crowd.
Posted by Purefecto at 9:00 AM